This is a guest post by Andrew Burridge, independent researcher and former volunteer with Bristol Signing Support.

This piece has been developed through having previously volunteered with a signing support group in Bristol, and forms part of their wider research in to the use of reporting in the UK asylum process. A more detailed version will appear in the forthcoming book For a Borderless World (edited by Reece Jones and published by the University of Georgia Press in 2018). 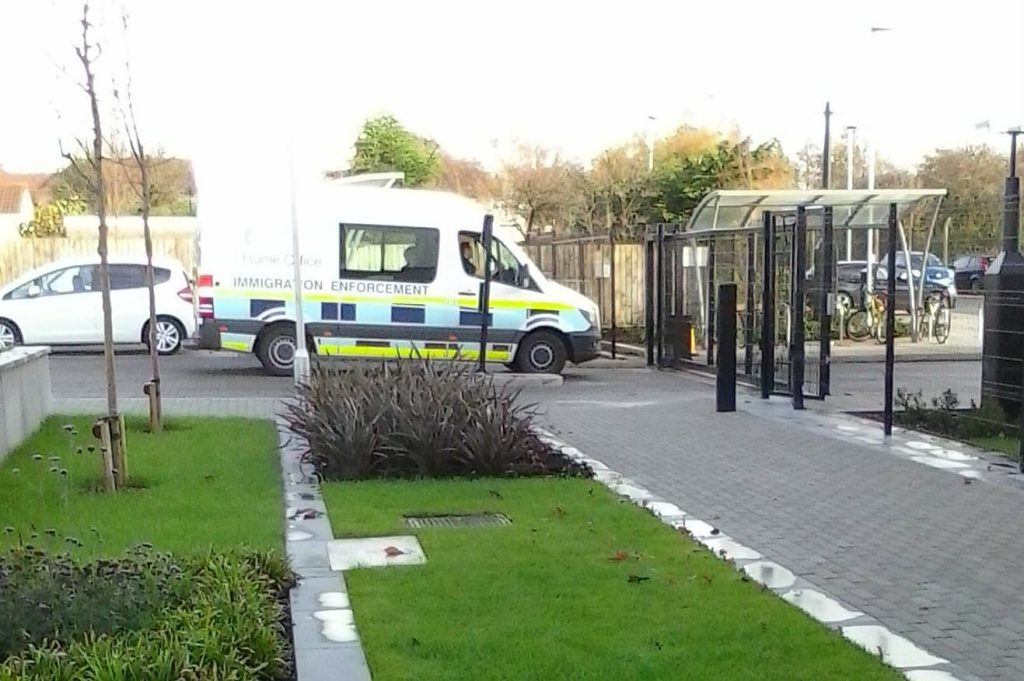 Asylum seekers awaiting a decision on their application to remain in the UK are required to regularly report to the UK Visas and Immigration Agency (UKVI; a division of the Home Office).
In 2014, it was estimated that approximately 60, 000 people report regularly in the UK, with the government spending £8.6 million per year to operate and staff the reporting system.  Reporting centres are found in two distinct locations: within existing Home Office buildings, or at local police stations where UKVI officials have permission to conduct reporting.

There is little awareness of reporting – or ‘signing’ / ‘signing-on’ as it is more typically referred to – as part of the asylum process; what attention it has drawn has typically focused upon reporting specifically for those released from detention or prison on bail (the latter being classed as Foreign National Offenders’ (FNOs) by the British state). While those on bail are required to report, those who are awaiting an asylum appeal hearing, have an onward appeal following a rejection of their initial appeal, or who are unable to be returned to their home country also must report.

Reporting frequency is determined by the Home Office, according to the likelihood of someone being detained and deported, and typically is set at a weekly, monthly, or six-monthly basis. Each person or family is assigned a day of the week, and a one or two-hour window in which to report. If they arrive before or after this window they will often be turned away or forced to wait. If they fail to notify the Home Office that they will be late or not attend on their assigned day (with sufficient evidence of why), they then become at risk of both losing any support they are entitled to and being detained.

Reporting as a form of internal border control within communities

As many required to report have stated, reporting creates exceptional anxiety and difficulty for those who are awaiting a decision on their status. Further it is a site of potential disappearance in to the UK’s detention and deportation system.

The pressure to attend a reporting event on time – either weekly, monthly, or six-monthly – is therefore immense. Reporting restricts people’s ability to travel or leave home for any significant period of time, for fear of missing their reporting requirement, especially when coupled with electronic tags and curfews, and limited financial support. Such measures, alongside the use of dispersal housing, fix people to knowable locations for the UK government and immigration authorities.
As Ines Hasselberg has previously stated, reporting is “located at the intersection between deportability and deportation.” (see endnote 1)

It is also often coupled with the use of electronic monitoring and curfews for those released on bail with such conditions placed upon them (see endnote 2).  Reporting is thus one of several options that the Home Office employs within its strategies of surveillance and deterrence, to “create a hostile environment” for those with irregular status.

Reporting is also used as a moment for conducting unannounced interviews, often framed to the person reporting as simply a conversation and therefore not requiring legal representation or advice. Further, reporting events are an opportunity for UKVI officials to attempt to convince people that they should return to their home country, by providing information on how the UK government can assist someone to return through the ‘Assisted Voluntary Return Program’.  As a Home Office spokesperson was quoted:

“Reporting centres are a vital part of our work to progress cases as quickly as possible, to encourage the voluntary return of people who have no basis of stay in the UK and enforce returns where necessary.”

While many in detention are placed there immediately after arriving in the UK, following workplace or home raids, or due to encounters with authorities including the police, others find themselves in detention after attending a reporting event. Reporting is therefore deeply coupled with detention and deportation and must be seen as creating what Nicholas De Genova has framed as an ‘everyday deportability’ both for asylum seekers and for those classed as Foreign National Offenders. (See endnote 3)

Detention at a reporting event

While those reporting typically remain unaware of exactly when they will be detained at their reporting event, UKVI agents will have known for some time that a particular person/s will be detained that day. There are several authorities that a person facing detention at their reporting event will potentially encounter: police front-desk staff, police custody officers, UKVI, Immigration Enforcement, and private security. For both those reporting and their support networks, the multiple agents encountered, with their diverse forms of authority, can be intimidating and confusing. Understanding who to speak with, or where a particular agent’s authority begins and ends, becomes complex. Agents often rely on this confusion and blurring of roles, continually passing both those reporting and their supporters from one authority to another and back again, frustrating efforts for effective support when someone is detained.

Within Home Office policy, ‘removal windows’ are used to notify those not currently in detention that they face imminent removal from the country, typically notifying people by mail. Under new Home Office policy brought in to power through the Immigration Act of 2014, asylum seekers can now be removed from the country without first spending a night in detention – that is they can be taken immediately from their reporting event to an airport and removed.

Location of reporting centres and difficulties encountered in travelling to them

Across the UK, recent closures of both police stations and Home Office buildings used as reporting locations have resulted in the relocation of reporting for many, meaning costly and lengthy journeys. Both the police and the Home Office have been undergoing a process of consolidation to reduce costs. These closures have had significant ramifications for those who are required to report to such authorities, and for groups seeking to provide solidarity, with little consideration of such impacts from the Home Office. This includes the effect upon a person’s ability to remain compliant, or upon their eventual decision to return to a home or third country, as well as the difficulties that distant relocation creates for effective support and advocacy.
In 2015, an example of such closure and relocation was witnessed when the Home Office building in North Shields (Northumbria House), situated on the outskirts of the city of Newcastle in North East England, was closed with all services conducted there relocated. Those dispersed to housing in Newcastle and its surrounds, and reporting in North Shields, are now required to report in the city of Middlesbrough. In late 2014 in Bristol, reporting was relocated from the Trinity Road Police centre in central Bristol, to the new Patchway regional police centre, in South Gloucestershire, roughly 7 miles north of Bristol city centre, taking 45 minutes by bus. These are just two examples of relocation and increased travel distances for those reporting.

For those required to report, provision of a travel allowance is provided only to those who fall under Section 95 support, or in the case of Section 4, under a separate provision, at the discretion of the Home Office. For those facing lengthy and often costly travel to their reporting location without travel allowance or other outside support this can become an impossibility, sometimes resulting in walking becoming the only option. Those without travel support are typically also required to report most frequently, on a weekly basis, due to their high-susceptibility to being deported. For those who are eligible to receive vouchers for their travel, they must know to ask an UKVI agent at their reporting event for the correct form, or rely on the goodwill of an agent to notify them of this right. Therefore it is likely that many go without support that they are entitled to. 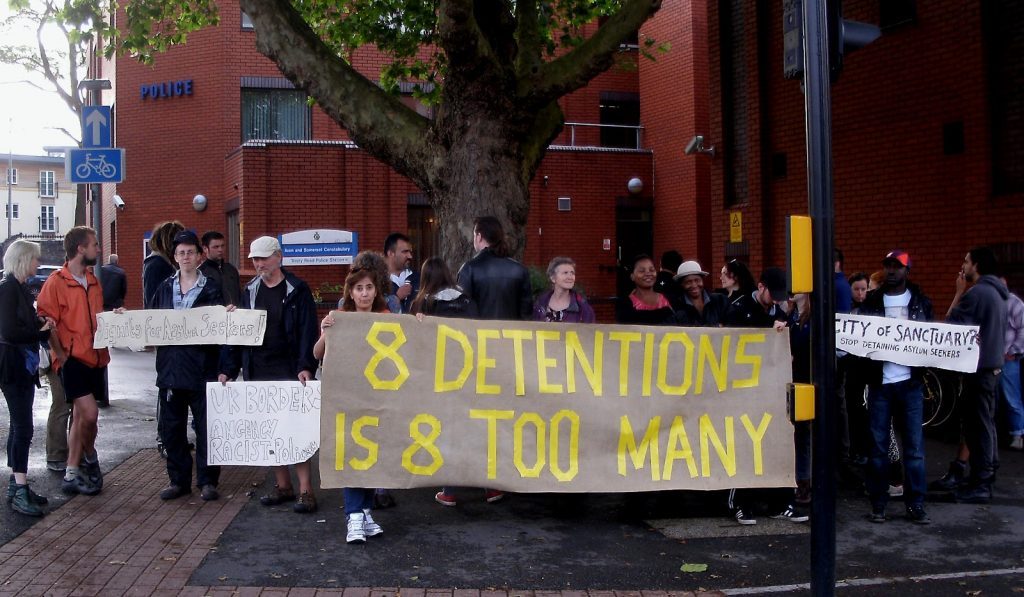 Flash protest outside Trinity Road Police Station in central Bristol, following detention of 8 people in one morning in 2012. Reporting was conducted until 2014 at this location before relocating to Patchway. (photo: Bristol Dignity for Asylum Seekers)

There are several signing support groups located across the UK of varying size and formality, though no definitive list of active groups exists, and no overall network is in operation allowing these groups to connect and share skills and knowledge. In the city of Leeds for example, a No Borders group calls people before and after their reporting event to determine if they have been detained, while in Bristol a dedicated signing support group meets with people outside of the police station and directly accompanies people when they report.  Further, there is no set practice in how signing support groups operate, and such support may not be distinguished as separate from an existing charity or local refugee support organisation. Support groups also span a diverse ideological spectrum, from local church groups to explicitly abolitionist and no borders movements, often forming a mix within individual groups.

It is the moment between being detained within a STHF or custody suite at the reporting location, and being transferred to an IRC, typically within the space of several hours, that is essential in providing solidarity and advocating for the person detained. Support groups will often have securely stored details of those they accompany, and so can often contact family members and friends, or legal representatives to begin the process of legal support immediately. Support groups can also contact the Home Office in efforts to determine which IRC the person will be transferred to, though not always with success. Clothes, medication, and other vital items can also be collected and passed on from the front desk to the holding facility, often the only opportunity to get such items to the person as they may not be accepted at the IRC, or take several days to get there, again relying on the cooperativeness of officials on the front desk of the Home Office facility or police station.

While a detention will happen in a matter of seconds, if a supporter is present they can reassure the person in a moment of exceptional distress that they will be supported. A flash campaign can be mobilised to take place outside the Home Office building or police station, and other strategies may be deployed to frustrate officials in their efforts to remove the person/s to an IRC. More often though, it is recognised that alerting legal representatives, and/or family members and friends, and determining where someone will be transferred to, is more effective and essential in this moment.

(1) Ines Hasselberg, “Coerced to Leave: Punishment and the Surveillance of Foreign-National Offenders in the UK,” Surveillance and Society, 12(4) (2014): 472; see also Ines Hasselberg, “Reporting to the Home Office: Control, Risk and Insecurity”, https://www.law.ox.ac.uk/research-subject-groups/centre-criminology/centreborder-criminologies/blog/2015/05/reporting-home
(2) Axel Klein and Lucy Williams, “Immigration Detention in the Community: Research on the Experiences of Migrants Released from Detention Centres in the UK,” Population, Place and Space 18 (2012): 741-753
(3) Nicholas De Genova, “Migrant “Illegality” and Deportability in Everyday Life,” Annual Review of Anthropology 31(2002): 419-447