Under the shadow of Trump’s aggressive policies against people crossing the US border, the rise of xenophobic parties and policies in Europe, and ongoing scandals of Theresa May’s ‘hostile environment’ immigration policies, things often seem bleak.

But within this people are also surviving, thriving, celebrating each other. On a recent Saturday, to round out the 20th year of Refugee Week, activists, poets, musicians, and more gathered to do just this in Friends House in central London for a night of art and resistance.

The event was organised under the ‘These Walls Must Fall’ banner, a campaign which is a growing network of groups, organisations, communities – from all sorts of backgrounds – with a determination to end the injustice of immigration detention.

John P and Kassonga, two activists from the experts-by-experience group Freed Voices, gave the crowd a ‘detention pub quiz’, detailing the human rights abuses that go on every day in our country. They highlighted how every year approx 29,000 people are detained without trial, and with no time limit for their release. The UK is the only country in Europe which practices indefinite detention. The Trump administration is making plans to detain families indefinitely, while in Canada this policy has existed for years.

John P talked about how 50% of people detained are released again, but that they are often re-detained. He said he was detained three times in 10 years, and that each time he went back “My bed was still warm.” When over 100 people started a hunger strike in Yarl’s Wood, one of their key demands was to end the cycle of re-detention. Official documents said that government should consider either releasing women in order to end their hunger, only to detain them again later. Or they should try and deport them more quickly.

Kassonga highlighted the mental health issues that happen to people because of detention: “When you leave detention, detention does not leave you.”

Contrary to false statements earlier this year by ex-immigration minister Brandon Lewis, “45% of people detained have asylum claims”. But Kassonga was at pains to point that “detention is not just an asylum issue, but a human right issue.”

The final question was about how last November, Manchester City Council became the first UK council to pass a These Walls Must Fall motion against detention.

These Walls Must Fall

Joyce and Arianne, activists from Liverpool involved in These Walls Must Fall, spoke about recent successes and movement building. Following the motion in Manchester other councils have taken off, including Cambridge and Brighton and now Islington in London, with people in other cities expressing interest to get motions passed locally.

Local groups coordinated protests and rallies in solidarity with the Yarls Wood hunger strikers in March. Politicians including Shadow Immigration Minister Afzal Khan MP and Julie Ward MEP have supported the campaign stood up and said that indefinite detention must end. The recent Liverpool launch of the campaign packed out a local community centre and won the support of migrant support groups, Liverpool Trades Council, the Merseyside Pensioners Association, and the UCU Committee at Liverpool University. 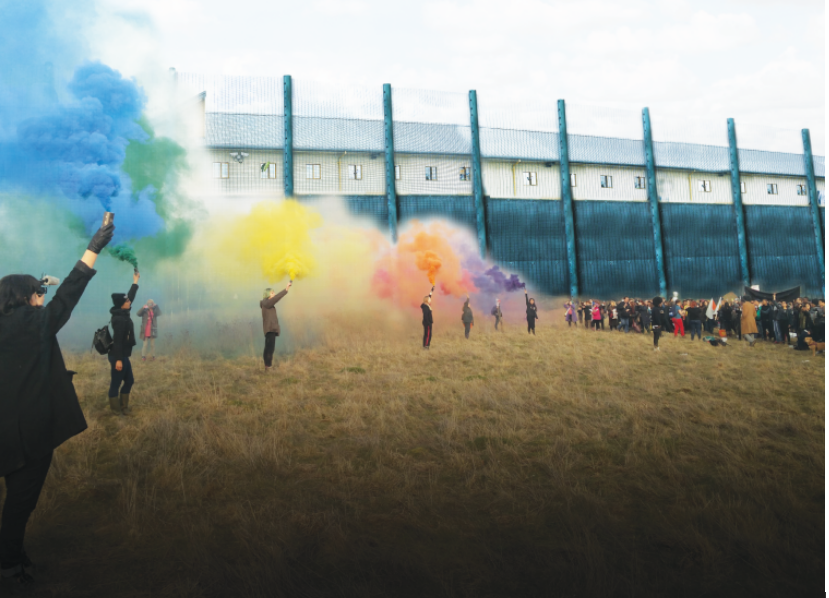 “Home will be somewhere you run to, never away from”

Poet JJ Bola recited poems from his new book. Days before, his work had been read out in parliament. Among the themes was (the fragility of) ‘home’:

Laila Sumpton from Bards Without Borders touched on the ‘hostile environment’ and creeping normalization of borders into day to day life:

Open your pencil case-
we are scanning your crayons for prints
and before you complete Algebra2
we need your passport or failing that
a blood sample.

Before you buy plimsols we need to know
the soil your feet first stood upon.

Do you have the right skin to drive?

Before we mend your arm we need to know
what first broke your English,
we suspect it may have been your birth.

Selina Nwulu, who was previsoulsy the young poet laureate for London, asked in her poem:

How long must make a case for migration? Recount the times it has carried this country on its neck so this nation could bask in its so-called ‘greatness’? How loud should we chant our stories of beuty, of struggle, or grit? Write all the ways we are lovely and useful across our faces, before we become a hymn sheet signing of desperation?

The music was provided by the fabulous the Nawi Collective, a London-based black women’s vocal collective, and unmissable East London music outfit Hejira. Nawi Collective performed songs of resistance and hope. Including renditions of ‘Wayfaring Stranger’ and ‘Freedom’, they created a song on the spot – made up from words and themes put forward by the audience. The theme was ‘No Justice, No Peace’. Hejira ended their set with the smash hit ‘I don’t belong to anyone’. 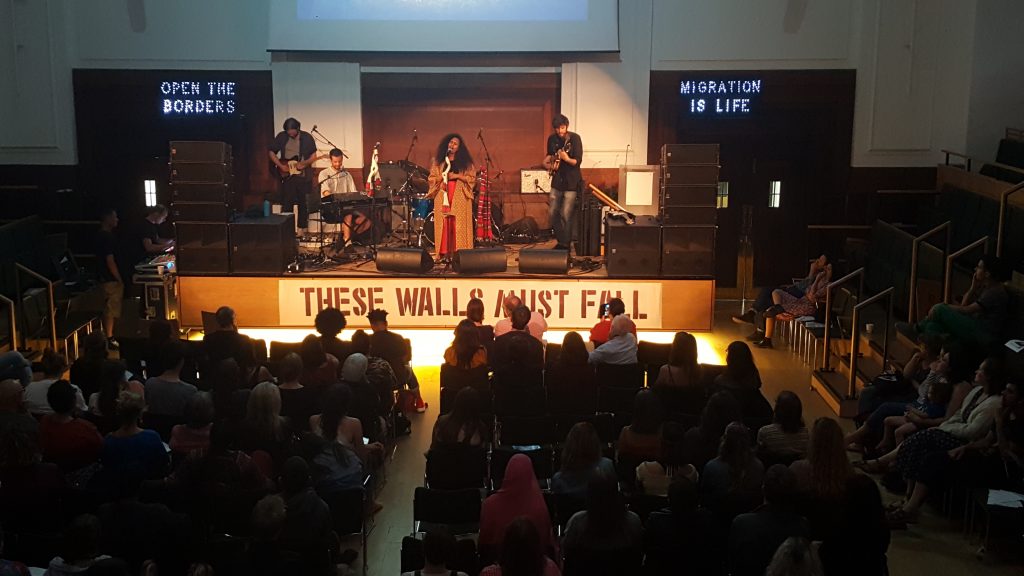 Racial justice activist Tatiana Garavito reminded the crowd not just of need but also of the reality of the campaign: “Of course, we don’t only believe that ‘These Walls Must Fall’ but that ‘these walls will fall’, thanks to all the activism and all the work that we are going to be doing from now on.”

The movement against detention is growing. Go to detention.org.uk to find out more about These Walls Must Fall and to get involved.