Every year for the past three years, Right to Remain has helped to run an innovative and participatory social media project that raises awareness of immigration detention in the UK – it’s called Unlocking Detention (or “Unlocked” for short).

The idea for Unlocking Detention came from the fact that many of the UK’s detention centres are geographically very remote and that the injustice of immigration detention was being kept hidden away – “out of sight, out of mind”.

People held in immigration detention are isolated and hard-to-reach. People may be held in a centre (in prison-like conditions) hundreds of miles from where they were living, and many miles from any city, with no public transport to get there to visit.  The system is operated to isolate people – and detention as a policy issue is very remote from the minds of most members of the public and, until recently, from the minds of most of our elected representatives.

This means most people have no idea what immigration detention is, what it’s like, who is it for and why it’s such an outrage.  For such a grave human rights issue, detention has been a remarkably hidden topic – over the last 20 years since the first detention centre opened, the detention estate has massively expanded and until relatively recently, with almost no public debate or political scrutiny.

Because of this lack of awareness, detention became accepted as a “normal”, integral part of the system of immigration administration and enforcement.  Unlocking Detention seeks to change this – through the voices of those at risk of detention, those living with the scars of previous detention, communities damaged by detention, and all those seeking to change it.  Although Unlocking Detention uses a geographical tour as a starting point, the project goes beyond the location and operation of detention centres, shining a light on all aspects of detention, and its place in the system of immigration control. 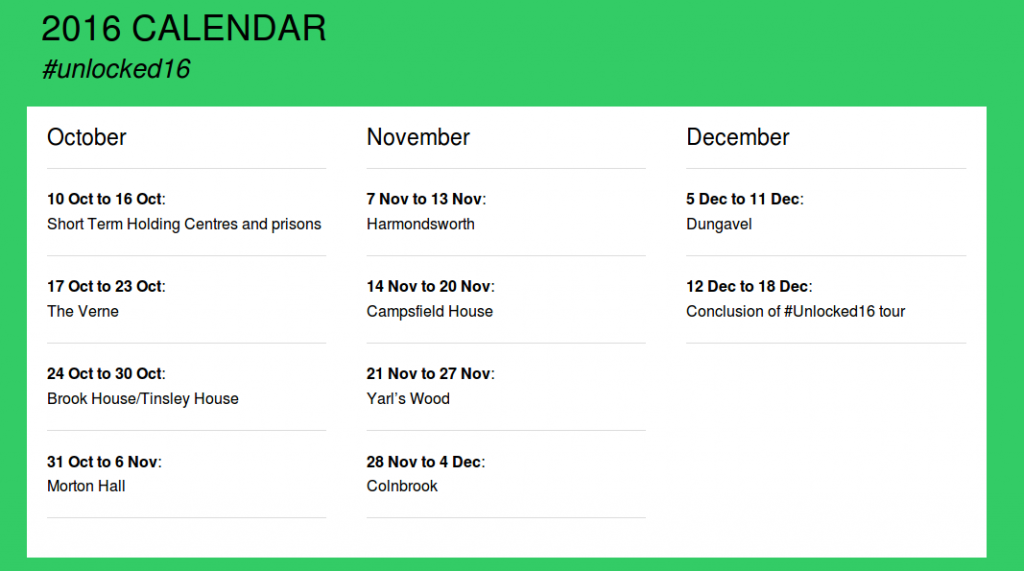 You don’t have to be an expert on detention, or directly impacted by detention, to be involved.  If you are interested in, concerned by or have questions about immigration detention, join the conversation!

How you can get involved

Read the Unlocking Detention blog posts.  Every week of the tour, there will be new pieces to read from diverse authors, on many different topics.  We’ll have some great pieces out during the tour, but for now you can catch up on the amazing range of blog posts we’ve shared over the last two years.

Be part of Unlocking Detention on Twitter.  The hashtag for the tour is #Unlocked16 and you can follow the Detention Forum on Twitter @DetentionForum for tweets everyday about the centre that is the focus of the week, and detention in general (don’t forget to follow Right to Remain @Right_to_Remain as well as we’ll be tweeting along during the tour!).  If you are on Twitter, be part of the conversation by tweeting with #Unlocked16 … but if you’re not on Twitter, don’t worry! You’ll be able to find all of the tweets and retweets from Detention Forum on the Unlocking Detention website.

Getting the word out.  Look out for Unlocking Detention articles in other online media platforms (we’ll share them via Twitter, Facebook and the blog!) and you can also be a hugely important part of the tour just by talking to people about detention.  You might find the Unlocking Detention blog posts, interviews and other material by people affected by detention that we share a good way to start this conversation.

Looking forward to you joining us!  The tour starts on October 10 and runs till 18 December.

2 comments on “Unlocking Detention 2016: be part of shining a spotlight in the shadows”