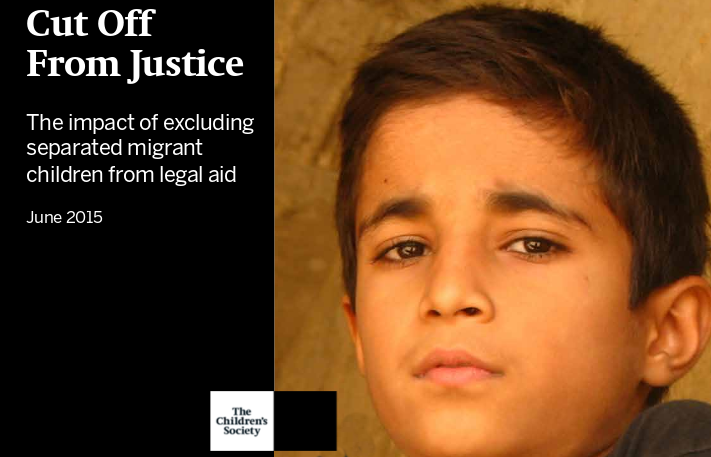 New research from The Children’s Society has revealed the extent to which vulnerable children have been hit by the legal aid cuts.

The report – Cut Off From Justice – has found that many young people are now attempting to navigate the complex immigration legal system alone, having to represent themselves in immigration tribunals. Others are being put at risk of exploitation and abuse as they try to raise funds for lawyers.

Last week the government announced it was cutting the support rates for families seeking asylum, putting more children into dangerous poverty. This week, the Children’s Society   research reveals that thousands of lone children and young people are being denied access to the law, leaving them vulnerable to exploitation, homelessness and unfair treatment.

In April 2013, the Government implemented changes to the legal aid system, meaning people are no longer be able to get free support with their immigration cases. This included many separated or unaccompanied migrant children – those without a parent or guardian in this country.

The report finds that without legal aid, huge numbers of children are being left to fend for themselves. Many are having to gather witness statements, evidence about their past and risk having to represent themselves in court — a challenge that even adults find difficult.

The legal aid cuts have also resulted in a significant drop in the number of specialist immigration lawyers. The research found that, across the UK, free regulated services which deal with appeals and representation have been reduced by almost 50%, while overall immigration advice services have been cut by at least 30% since the Legal Aid, Sentencing and Punishment of Offenders Act came into force in 2013.

As a result, even children who are still entitled to legal aid, such as those seeking protection from persecution or who are known to have been trafficked, may be unable to get the legal support they need due to a lack of free services in their area.

“Decisions crucial to their lives are not being prioritised and are avoided until they hit crisis point – usually when children turn 18, which is when councils are no longer legally obliged to look after them,”

The report summary describes children trying to resolve their immigration issues on their own,  forced to become ‘mini solicitors’ struggling to prepare witness statements and gather evidence about their past. This is leaving them stressed, fearful and unable to participate properly in their education. Some young people told the researchers they have had to raise thousands of pounds to pay for legal advice themselves.

“Without legal aid, children are being denied the equal justice they deserve. This is putting many in danger and is harming their well-being and future opportunities. It is crucial the Government restores this lifeline to all children who are here on their own so none of them is cut off from justice.”

The Children’s Society has applied for a judicial review to challenge the Lord Chancellor’s refusal to re-instate immigration legal aid for unaccompanied children.

Everyone, but especially children and vulnerable young people, should have equal access to the law, no matter their country of origin. Sadly, in the UK this isn’t the case. More and more people are being excluded from justice, denied their basic rights. This is why we produced the Right to Remain Toolkit, to help people to understand the system, and to help each other get through it.

For information on navigating the immigration and asylum system, and taking action for the right to remain, see the Right to Remain Toolkit.