This Saturday, there will be actions in London, Manchester and Newcastle to protest the introduction of immigration checks in the NHS.

The Minister for Health, Jeremy Hunt, has brought in a policy of passport checks for all patients accessing NHS services and demanding upfront payment from people who don’t qualify for free care.

As health professionals have pointed out, these rules go against the principles of the National Health Service – of universal health care, of treatment for all and not just the rich – and indeed pose a risk to public health.

As Zoe Stewart wrote in the Guardian:

As doctors, we are acutely aware of the devastating impacts of delayed medical attention. In my field – obstetrics and gynaecology – we know that getting the right care at the right time is critically important for the health of women and their babies. In 2014, a woman thought to be carrying a dead foetus declined induction of labour because she feared she would be denied re-entry into the UK if she was unable to pay her bill of thousands of pounds.

An already overstretched health service is being compelled to add additional procedures into its practice which has unsurprisingly already led to errors and discrimination (beyond the intended discrimination of the policy).  Just this month, the Independent reported on the eight-day-old baby asked to provide identity documents to prove her right to free healthcare.

One lifelong resident of Grantham, Dena Bryant, had her eligibility for care at her local hospital questioned by a nurse who justified her questioning because Bryant was “not white” and did not “look English”.

These checks are a particularly pernicious example of the Hostile Environment in our communities – outsourcing immigration control to ordinary people (who are the neighbours, friends, family members and peers of those they are being asked to control).  This is dangerous and divisive and entirely undermines the aim of integration that the government claims to hold so dear.

The reality is that these policies represent yet another instance of the government attempting to blame migrants for the devastating impact of their austerity agenda. The Department of Health’s own estimate is that “deliberate health tourism” costs at most 0.3% of the NHS budget annually. This amount of money is a drop in the ocean for the NHS, while a £5,000 charge may be everything to a patient seeking treatment.

We should be concerned about the sustainability of NHS funding, but this focus is a distraction from the real issues, such as the billions of pounds spent annually on PFI repayments. Checking passports at the point of care will not rectify budget concerns, and directly contradicts the values on which the NHS was founded.

And this Saturday, people are coming together to say NO to borders in healthcare, and #PatientsNotPassports.  Organised by Docs Not Cops, there is a day of action against the immigration checks, with marches in London, Manchester and Newcastle.  See you on the streets! 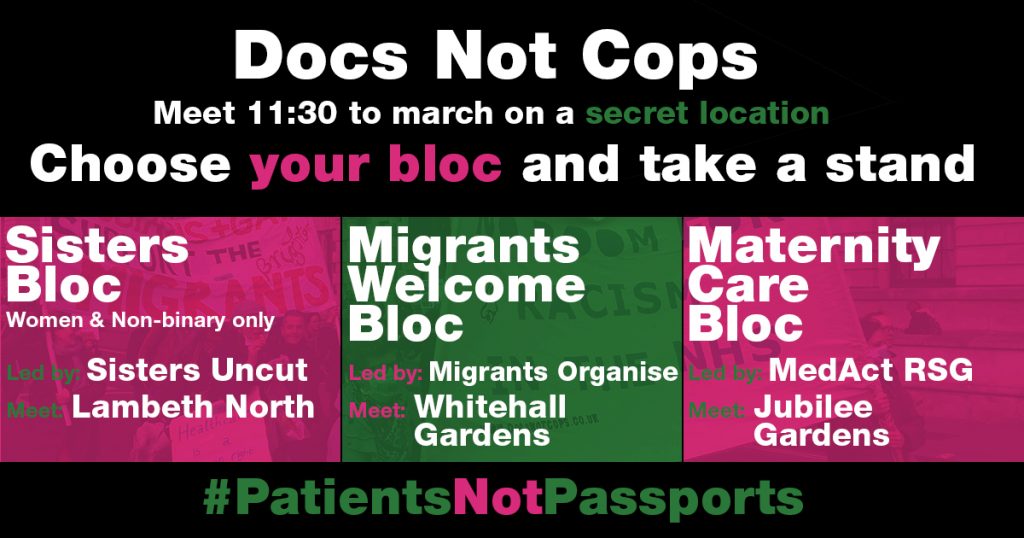