Rakiba is part of the Young Citizens network, Coram’s ambassador programme for young people from migrant and refugee backgrounds. She is studying with The Prince’s Trust and The Baytree Centre. In the future she hopes to study at university.

Rakiba writes for Right to Remain about her journey navigating the UK, the difficulties of accessing education without documents, and what she has learnt through Coram’s photography project.

A recent study released by academics at the University of Glasgow reveals that around two-thirds of Syrian refugees in the UK aged 18 to 32 are engaged in employment or study.

I am just one of the young Syrian people in this country eager to study, work and contribute to British society. 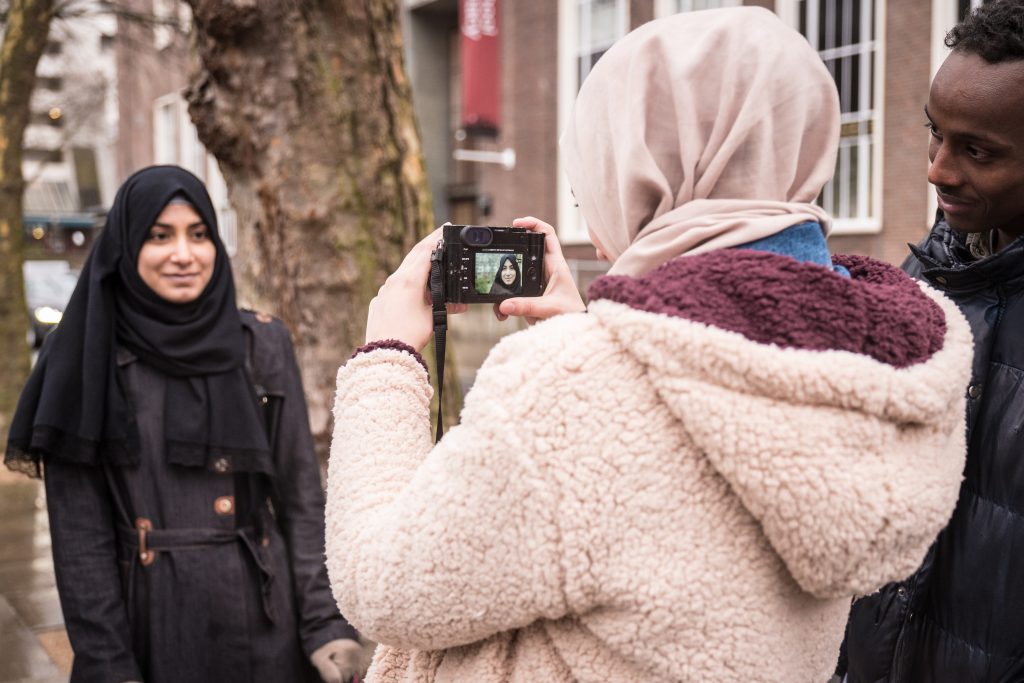 I was raised in Syria and left when I was 13 years old because of the war. I lived in Turkey for two years before I moved to London.

I never thought I’d have to leave Syria. Everything was prepared for my future and suddenly everything changed. When I moved to another country I had to start from zero because I didn’t have any documents or qualifications. The school I went to is now dust. I have no pictures or letters from my childhood and have no way of speaking to my friends in Syria. I just want to know if they’re still alive. The only thing I have is my memories so I try to hold onto them tightly.

I am a member of Coram’s Young Citizens project working to help other children and young people from similar backgrounds. We can do this because we understand what they’ve been through. At the moment we are doing a photography project, learning how to take photos and edit them in a professional way. Our aim is to show our dreams and hopes through the photos – what we are proud of and where we want to be. The photos show that we are positive even when we have barriers in our lives.

We hope that the photos will make people think about us differently. Some people think that we all came from the streets. In Syria my family were rich and owned lots of land and houses. We never asked the government for anything and we made everything for ourselves. People think we are savage and just want to take from others. But we want to be independent and do things for ourselves. We just need a little push to build our confidence and maybe some support with finding a job or getting into education and then we can achieve a lot.

I have overcome lots of barriers since being in the UK. It was really difficult for me to speak to people when I first arrived. I couldn’t explain to them my feelings or when I needed something. I was afraid and I didn’t have the confidence to make a conversation with anybody who spoke a different language from my own.

But since I have been here I have met nice people and I am really thankful about what they have done for me. I have learnt about new cultures and food and can now speak good English and communicate with people but I’m still learning.

I have a problem with education because I don’t have enough documents to be in the system. So since I’ve been in London I have had to go to charities to do courses because they are the only places that accept me with only a few documents.

I really would be grateful if education rules could be relaxed for foreign people so that we can be in education without formal documents. They should accept photocopies as it’s really hard to get documents from Syria because everything is destroyed by war – you can’t even make phone calls and there are no planes going in and out of the country. This needs to be taken into consideration.

I think that university and colleges should be free for people over 19 who can’t afford it. Some students have to leave their studying to work because they don’t have the ability to study. This means even when they do study they will think about the amount of money they will have to return and this will lead them to not focus on their dreams.

My hopes for the future are to go to university and become a successful person that my family and I will feel proud of. I hope that when other children and young people from migrant backgrounds see our photos it will inspire them and give them hope for their futures. No matter what struggles you have to go through in your life you’ll get what you want in the end if you have the desire.

Young Citizens is a voluntary ambassador programme for young people from migrant and refugee backgrounds aged 16 to 25, run by Coram with funding from The Queen’s Trust.

Coram’s Young Citizens have partnered with professional photographer Arteh Odjidja on his latest project the Stranger Series. They are developing a series of photos to showcase their hopes, dreams and aspirations. Their photos will be exhibited during Refugee Week in June 2018.