“[A] kitchen worker said staff at his branch were told the meeting was about “a new hamburger that they were going to start selling”. 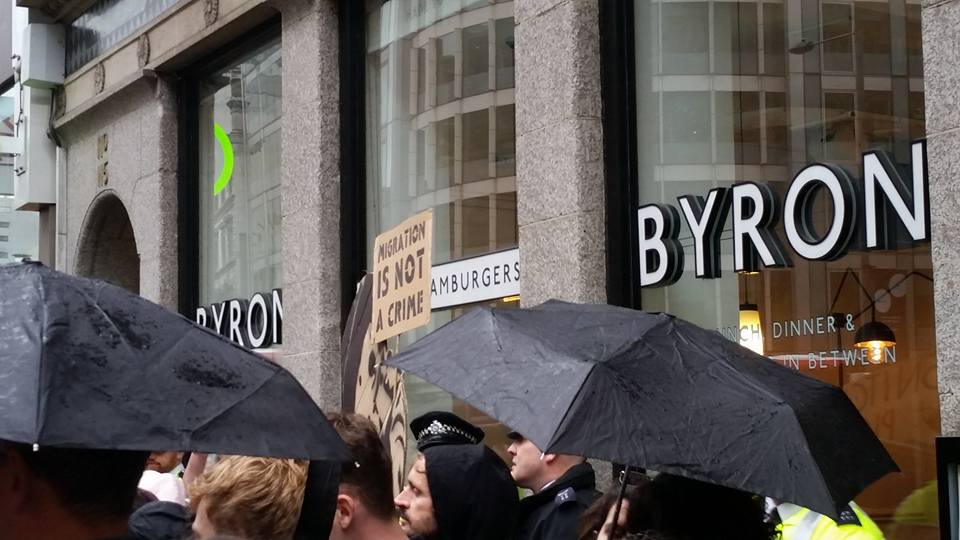 This week, Byron burger restaurant has hit the headlines after arranging a fake meeting in order to shop its undocumented workers to the UK Home Office.  35 people from countries including Brazil, Nepal, Egypt and Albania were arrested following the raids that took place across London on the morning of 4 July and it seems many have already been forcibly removed from the UK.  The story was first broken by the Spanish language El Ibérico newspaper over a week ago.

Lisa O’Carroll and Sam Jones of the Guardian newspaper have interviewed workers who were present at the raids, and have even spoken to some of those who have been removed/deported.

In the first insider accounts of the swoop on foreign workers in one of Britain’s most popular burger chains, one worker said they were summoned to a meeting about the dangers of medium and medium-rare cooking of burgers.

“This was strange, because we already had this training,” said the worker, who has already been deported. A chef at a different branch in central London said they were told the meeting was about a new burger recipe.

The targeting of staff at a dozen Byron restaurants in London was part of a carefully planned “intelligence-led” raid by the Home Office, which according to insiders involved between four and a dozen officers at each branch.

One of the kitchen staff said she arrived for the meeting at 9.30am, but within minutes four immigration officers burst into the building. “They said, ‘nobody move, we’re immigration, stay where you are’, and then they started calling out names and took the people they were looking for aside,” the worker said…

“I feel really sad about this. Everyone is hysterical about immigration. It feels like it must have been in the 1930s or something,” said a worker, who, like all the staff the Guardian has spoken to, requested anonymity.

In an earlier report by Lisa O’Carroll, a fellow worker said “It is fucking disgusting. Some of these people worked here for four or five years and they weren’t even given a chance to say goodbye,”

There has been, unsurprisingly, considerable public furore about these events, with protests happening and scheduled across the UK outside Bryon burger branches.  However, there has also been a disturbing trend of defending Byron’s behaviour by describing it as ‘just obeying the law’.

It remains unclear whether the company will escape criminal prosecution and hefty fines (to which they would be subject for employing people without the immigration status that allows them to work) – there were early suggestions that this elaborate collaboration with the Home Office was arranged in order to avert these consequences.  What is undisputed however, is that Byron burgers deliberately set up fake meetings in order to lead the undocumented workers into the hands of the Home Office.  They lied and they betrayed.  They benefited from the labour of these individuals – in some cases for years, and in most cases paying just the minimum wage – and then discarded them in a frankly sickening manner.

One of the most alarming elements of the arguments along these lines in defence of Byron is the unspoken assumption that ‘the law’ (even this phrase gives an impression of a monolithic, abstract thing) is untouchable, and static.  That the law is neutral, objective, and apolitical.  This is of course far from the truth – laws are shaped by people, and changes over time, often is relation to changing ideas of what is ‘just’ and ‘moral’.  If this wasn’t the case, homosexuality would still be illegal and women would not be able to vote, to name just a couple of obvious examples.  Apartheid in South Africa was not against the law, indeed it was enshrined by the law.  Laws can and should be challenged – sometimes this is through legal processes such as pioneering case law, sometimes through the actions of people in protests and boycotts.

There is a real danger in the passive acceptance of unjust and immoral laws, especially at a time when the government is bringing in more and more punitive laws to control or repel the most powerless in society.

When we do not believe a law is just, it is our democratic right to demand it is overturned.  When a company acts immorally, it is our democratic right to call them out on this.  Many people supported boycotts of Amazon, Starbucks and others when it was discovered they were paying a pittance in tax despite making huge profits in the UK – despite the fact they had not broken any law.  We should be shaping the world we believe should exist, not accepting injustice because ‘those are the rules’.

Who is the law for?

Even if people believe that the removal/deportation of undocumented workers is just because they had broken the law, this doesn’t address the huge inequality of who experiences the consequences of breaking laws.  Byron will in all likelihood prosper and continue to profit after employing workers illegally.  It is the undocumented workers whose lives have been turned upside-down.  Just for trying to have a better life.

Many of us have been reminded of the case of Isabella Acevedo, found to have been working without the correct immigration papers for the then Immigration Minister Mark Harper.

Isabella worked for over 7 years as a cleaner for Tory MP Mark Harper. When it came to light that she did not have the paperwork giving permission to work, she was sacked from her job, and Harper resigned his post as Immigration Minister.  Around this time, Isabella’s daughter was getting married in the UK.  Just as her daughter’s wedding was about to start, a 15-strong Immigration raid team stormed the ceremony and took Isabella off to Yarl’s Wood detention centre and then deported her to Colombia.  Mark Harper returned to a new job in the Government. Who is the law for?

The possibly most bizarre argument is that the actions of the Home Office were in some way to protect the undocumented workers.  The ‘Secret Barrister’ wrote on his/her blog:

I have defended and prosecuted enough of these tragic cases [human trafficking and exploitation] to tell you with authority that there are a good many people whose lives have been saved by immigration enforcement officials. And one or more of those could have been among the Byron workers.

Firstly, violently deporting people – against their will –  from the UK would be a strange way to protect people.  Secondly, this leaves completely unexplored how much exploitation is caused by immigration enforcement.  With the increased criminalisation of migration, with so few legal affordable routes to come to the UK, exploitation is inevitable.  People are unable to move safely and securely, and are forced into dangerous, violent and abusive positions because of the web of immigration rules and border enforcement in our everyday lives and communities.

The Byron burgers saga is just one of so many unjust and inhumane immigration enforcement operations: we must use this time to stand together, and tell companies and governments that migrant workers, that human lives, are not disposable.