Yesterday, the 2015 Immigration Bill reached the report stage, at which proposed amendments were debated and voted on. 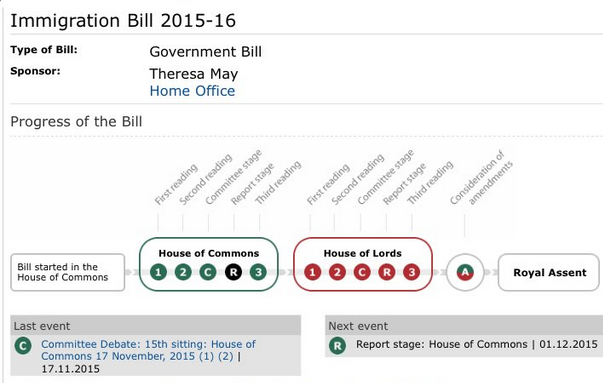 Let’s start with something simple. The Bill is not nice. It is a hardening and an extending of the measures designed to create a ‘Hostile Environment ‘ for migrants brought in by 2014 Immigration Act. That Act is such recent history that some measures are yet to be brought in, and many others have only recently been enacted. Although the 2014 Bill was described as bringing in a “regime of harassment for migrants”, and “the most racist piece of legislation that this country has witnessed since the 1960s”, and “dog-whistle politics.. that weakens and demeans us all” (said by the current leader of the Opposition), the Bill sailed through parliament apart from a delay when some Conservative rebels attempted to make it even more nasty.

You might have been forgiven for thinking it couldn’t get any worse. But if you’ve been involved in campaigning against unjust and harmful immigration procedures for some time like we have, you should know better.

The 2015 Bill proposes, amongst other things, extending the “deport now, appeal later” provisions to far more immigration categories (“remove now, appeal later”), meaning even fewer people would have the right to appeal a negative immigration decision in the UK. The idea that people can simply appeal from the country they have been removed to, or have chosen to depart to, is not borne out by the facts and immigration statistics consistently show alarming levels of poor Home Office decision-making. Appeals are a vital part of accessing justice. With appeal rights removed, more people are forced to resort to judicial review, a very complicated area of law and with increasingly restricted legal aid coverage.

The Bill proposes a new criminal offence for people working illegally, and an offence of driving whilst not legally resident in the UK. Banks and building societies will be turned into border guards, required to periodically check the immigration status of account holders.

The Bill enables landlords to evict people whose immigration status means that they have ‘no right to rent’ (a controversial scheme that has already shown an increase in discrimination against those who do have the right to rent but don’t have the ‘right’ coloured skin or accent.  The Bill also creates a new criminal offence, with a maximum five year prison sentence, for landlords and “who know or have reasonable grounds to believe that their property is occupied by a person who does not have the ‘right to rent’” http://www.righttoremain.org.uk/legal/immigration-bill-2015-ilpa-briefing/

The Bill removes the right of appeal against decisions to refuse or discontinue asylum support, and by changing the ‘Section 95’ criteria, threatens to make destitute many families with children at the end of the asylum process.

So far, so nasty.

What the Bill doesn’t give much consideration for is the issue of indefinite detention in the UK, a cause that has burst into mainstream consciousness, media coverage and political debate through a combination of grassroots activism, awareness-raising and long-term political advocacy. The Bill could be an opportunity to end indefinite detention in the UK and increase the currently minimal and hard to access judicial oversight over the deprivation of liberty of 30,000 migrants a year.

As Peter Grady, legal officer at UNHCR commented during the Committee stage of the Bill:

If I had my one wish…it would be for the introduction of a time limit on detention… to [help] ensure compliance with what UNHCR views as being international standards relating to detention”.

Despite this lacuna, immigration detention was one of the major features of yesterday’s report stage debate, due to several amendments proposed and backed across the political divide, seeking to seize this opportunity to right some wrongs.

Keir Starmer highlighted that detention was an unavoidable issue, that the very indefiniteness of detention itself causes much harm, and this is simply not acceptable in the 21st century.

Keir Starmer also commented that detention cannot be allowed to stay “out of sight, out of mind”, a barrier that our Unlocking Detention project (run on behalf of the Detention Forum) directly seeks to address.

Stuart C. McDonald of the SNP started the debate by stressing his party opposes the Bill but that the “silver lining in this grey cloud” was the amendment proposed to introduce a 28 day time-limit on detention.

Richard Fuller brought admirable humanity into the proceedings, speaking of the women he has met detained in Yarl’s Wood, and contested the idea that he is interested in detention because Yarl’s Wood is on his constituency doorstep. It was instead, he stated, because indefinite detention goes against his “moral code”. David Burrowes spoke of the need to treat people with fairness and dignity, irrespective of whether they entered the UK ‘by fair or foul’.  Indefinite detention is about as far as you can get from fairness and dignity.

Paul Blomfield spoke in favour of alternatives to detention, with many established examples examined by the all-party parliamentary inquiry into detention, which are more just, more successful and far less expensive.

.@AnneMcLaughlin a tour de force – pitting compassion and decency against the intent behind the #ImmigrationBill

A particularly unpleasant part of the debate was the use of the phrase “illegal migrants” by some government representatives. This usage is inevitable when the phrase is actually used in the legislation itself, but of course that is exactly the point.

No human is illegal. The term is inaccurate, dangerous and offensive.

Just down the corridor

In stark contrast to some of the dehumanising language and arguments being used in the debate, in the same building the Sanctuary in Parliament event was taking place, organised by City of Sanctuary. People who have or are experiencing the UK’s asylum system first-hand, and their supporters from across the UK, came together to speak out against the continuing scourge of indefinite detention, destitution and the lack of safety and legal routes to safety. Some of the MPs speaking against tabled amendments yesterday showed woeful ignorance of the realities of seeking the right to remain in the UK – they could have done a lot worse than popped into the event to find out what things are really like.

James Brokenshire, in response to the proposed amendments to the Bill, remained implacable to the repeated, cross-party demands for a reduction in the number of people in detained, and the amount of time they are detained. The Immigration Minister insisted that the Home Office already has policies to prevent pregnant women and torture-survivors being detained, unless there are exceptional circumstances. They may have the policy, but they certainly don’t have the practice.

Safe-guards like a maximum time-limit of 28 days on detention are essential to prevent the unfair, harmful and at times unlawful detention of people in the UK. The tide is turning. There is cross-party backing for a time-limit on detention that cannot be ignored. The public is increasingly aware that the UK stands alone in not having a time-limit on detention, and is outraged, embarrassed, bewildered by this anomaly. Time is running out for the government, as civil society – led by those who have experienced the injustice of detention first-hand – refuse to tolerate this situation any longer.

The report produced by the first-ever parliamentary inquiry into detention said, on the current situation of immigration in the UK, “We cannot go on as we are”. This was a sentiment echoed repeatedly in the debate yesterday, and as the Bill moves on to the House of Lords, it is our job to see this sentiment turned into reality. For the thousands currently in detention, for the tens of thousands scarred by the experience, and for all undocumented migrants who live with the fear of detention looming over them, every day.