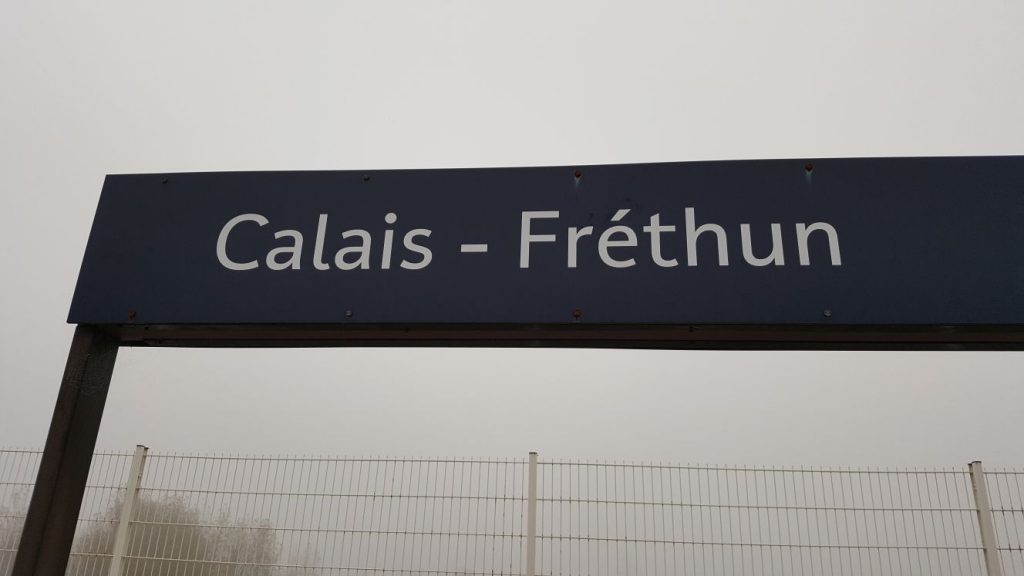 To mark the first anniversary of the destruction of the ‘Jungle’ camp in Calais, Right to Remain’s Luke Butterly reflects on our recent return to the area.

We set out early on our return trip to Calais.  The time difference between the UK and France means you lose an hour when traveling over;  yet it’s the presence of tall fences, razor wire, and concrete walls everywhere that really give the feeling of having being through a time-warp. 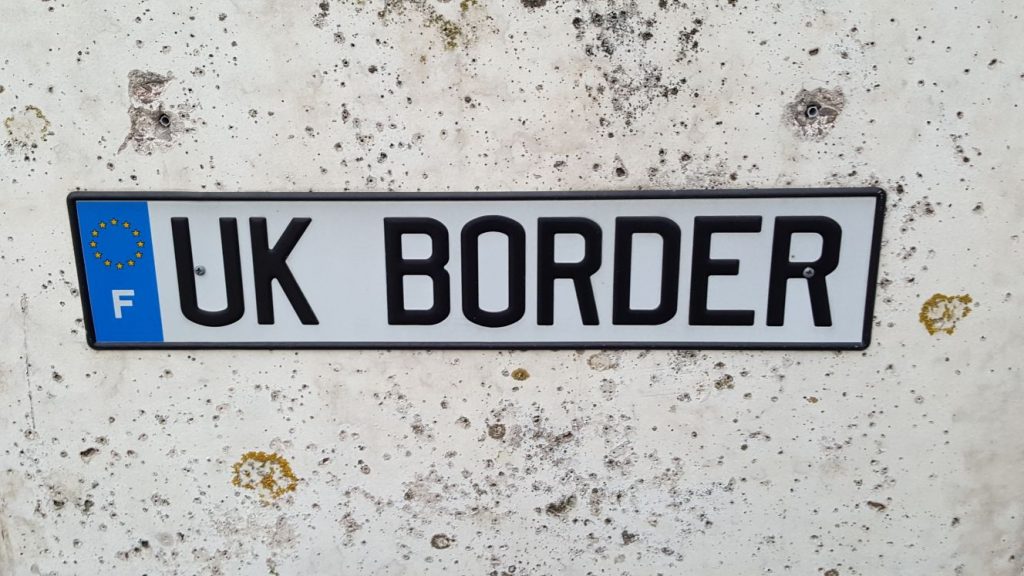 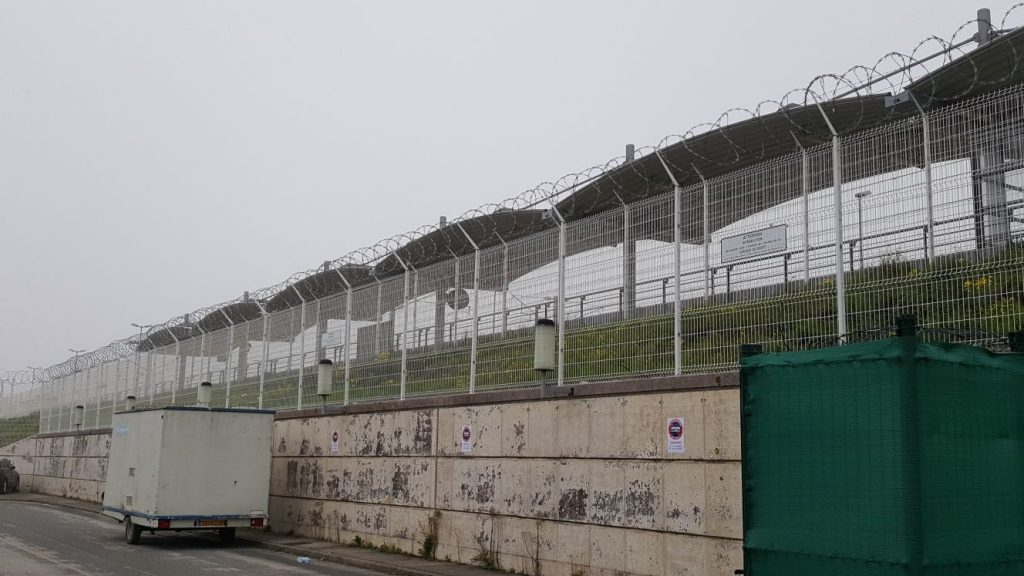 Solidarity groups active in the town estimate that one year after the destruction of the ‘Jungle’ camp (where up to 10,000 people lived), there are still several hundred people living in Calais, many of them unaccompanied minors.

Since the destruction of the camp – which contained homes, cafes, places of worships – many people are now sleeping rough. Volunteers are banned from handing out tents and sleeping bags, nor would many migrants accept them for fear of reprisal by the police.

‘Speaking in Calais, Fawad from Afghanistan said: “We sleep in jungles and there are a lot of problems from police. They take our everything; tents, sleeping bags, clothes.” He said migrants were always on the run from police, fearing being beaten if caught.’ (‘Calais: hundreds of migrants remain a year after razing of camp’, The Guardian, 23 October 2017)

Therefore, we witnessed many people sleeping on the side of the road (yet even abiding by the rules by refusing sleeping bags or tents does not guarantee protection – police assault migrants, and gangs of fascists have attacked migrants in Calais for years). The far-right Front National party won almost 50% of the vote here in the 2015 regional elections. Yet despite this hostility we heard how many local Calaisiens how been been providing solidarity and support to people on the move here – some of been helping for over 20 years. A refreshing thing to keep in mind …

There is now a policy of “no permanent sites, no squats, no reconstitution of the Jungle” by the local and national French authorities. The CRS (French riot police) are everywhere, along side the large concrete walls blocking off the highways. Many people wait for opportunities to cross at the aptly named ‘parking des pauvres’. The UK has spend £36million in 2016 on this project of ‘deterrence’ – all to stop people from the natural and human act of migration. Noting the juxtaposition between people being denied the most basic necessities with the a multi-million pound ‘security infrastructure’, a volunteer said in exasperation “IMAGINE what (positive things) could have been done with this money”. 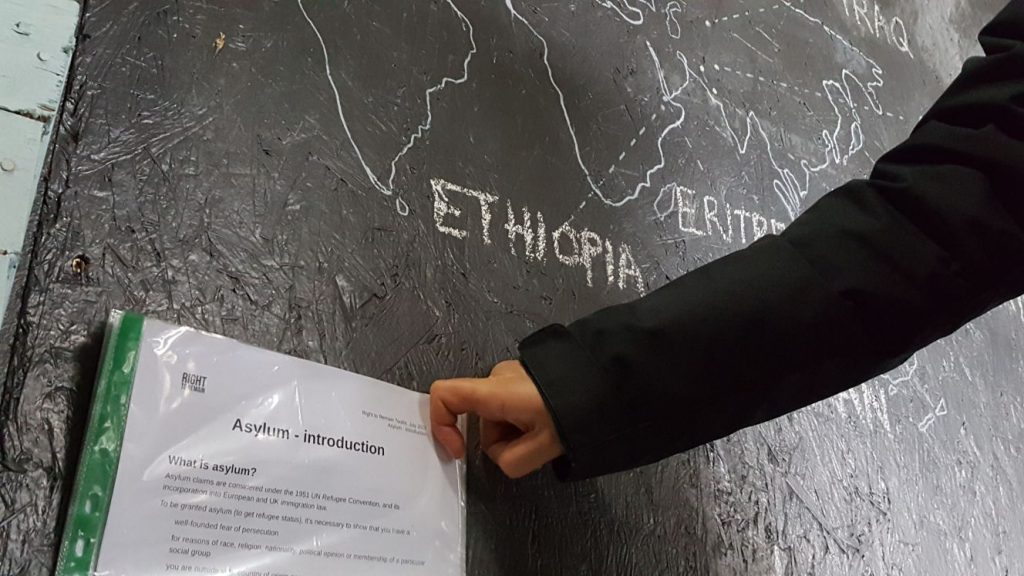 We meet several organizations doing vital work on the ground,  but not before participating in the collective ‘morning briefing’, where we heard of the days list of actions, and engaged in some jumping jacks!

One of the groups, Help Refugees, is a young grassroots organisation filling the gaps left by Governments and large NGOs in the refugee crisis by working with local partners across Europe and the Middle East. Apart from emergency humanitarian aid, Help Refugees aim for sustainable solutions, often by holding governments to account for their (in)actions through litigation and advocacy.
The Help Refugees/L’Auberge des Migrants warehouse in Calais has been operating since September 2015 and now hosts other partner organisations such as Refugee Community Kitchen, Refugee Youth Service, Utopia 56, Refugee Info Bus and the Dunkirk Women’s Centre.

The Refugee Community Kitchen was set up in 2015 and has served 1.5 million meals, now averaging 2,500 a day. Despite the large scale operation – one volunteer in Belfast told us how they peeled 2,000 eggs on their first day! – the food is delicious and healthy, which demonstrates their philosophy of #SolidarityNotChairty. 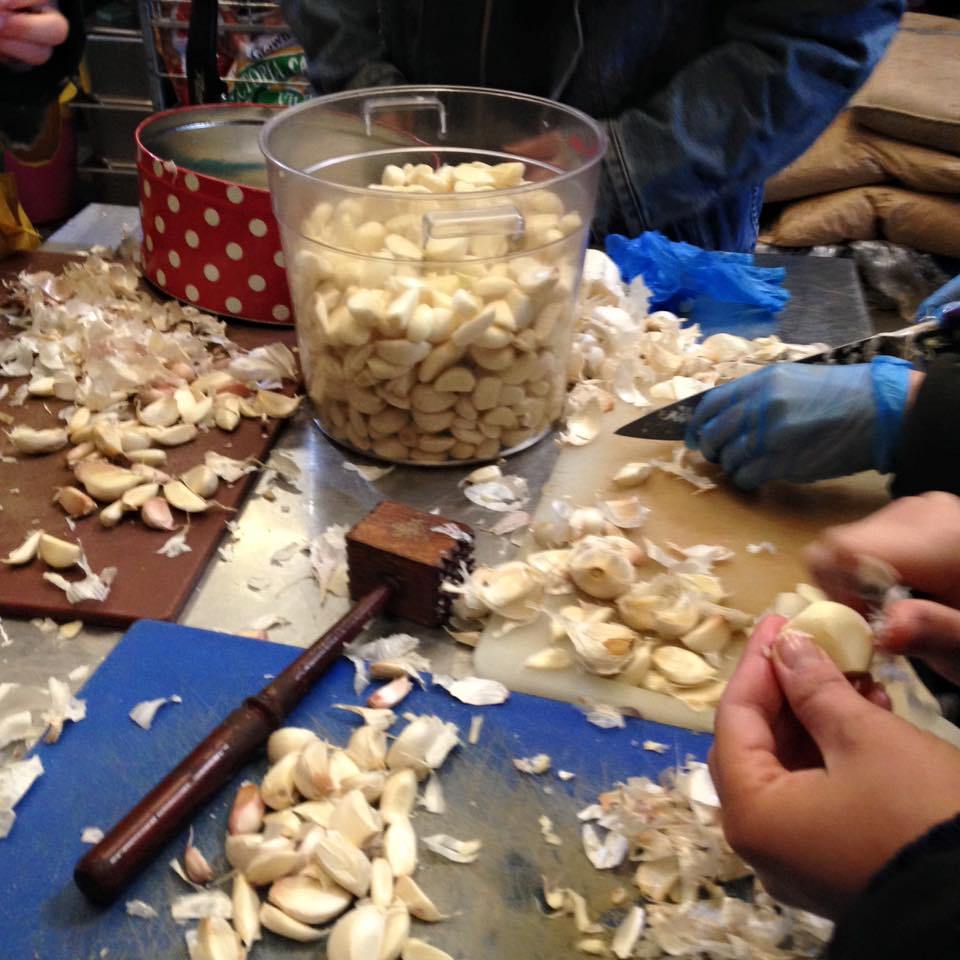 We delivered two ‘know your rights’ information sessions to volunteers. As with our previous trip, they focused on what to expect of the UK legal process, rights and options in the system, how to prepare for the inevitable problems, how to avoid the mistakes that can lead to refugees being unfairly refused asylum, how to be active and involved in your asylum application, how to get the legal and other help that you need.

(Most of the information can be found in our Toolkit – which is updated regularly, and a new print edition will be out soon.)

The sessions were constructive, with lots of questions and discussion – but were also tough: we are trying to compress an exceedingly complicated, hostile, constantly changing, system that takes months and years to navigate into a two hour session.

A recurring reaction was that the UK asylum system was more hostile than they had thought. However – people on the move here have a dream, be it reuniting with family, or even something less concrete. And while it appears the French system may in theory provide better protection to some people,  when we consider the utter racism and brutality that France has enacted upon them – from the police, the CRS, fascists, etc – its understandable that people may take the devil they don’t know over the devil they do.

During breaks we got the chance to speak more with various volunteers. One told us about how he got involved volunteering in through a community group in his home city in Germany, that has been running since the early 1990s. The group engages in the kind of work Right to Remain have been championing around the UK –  they provide advice, support, a twice week legal clinic, and experienced volunteers do mock asylum interviews with people. As with groups here (such as Glasgow’s Unity Centre) the project is based just across the road from the immigration services.

As well as the many amazing volunteers, we also met some celebrities! Camilla Thurlow of ‘Love Island’ fame and actor Paul Brannigan (‘Under the Skin’; ‘The Angels Share’) took time to speak with us about our work on immigration detention and the These Walls Must Fall campaign.

Lovely to meet you too and thank you so much for such an informative brief, I hope to see you again soon x

On our visit to one of the distribution points we witnessed Red Cross and other groups providing medical aid – likely for illnesses that would be completely preventable if people were not forced to live in such conditions.  On our tour, Right to Remain Coordinator Lisa Matthews noted the difference from this time and the last one (pre – Jungle demolition) – “You were really in it last time, but now its so separated”. It’s clear that the destruction of the physical ‘Jungle’ was also also an attempt to destroy the solidarity structures that migrants had set up for and by themselves, as well as those run by volunteers from Britain, France, and elsewhere.

At our recent trip to Belfast, we spoke to volunteers who had been out to Calais and Dunkirk. When we asked them what was the main thing that was needed; without hesitation they emphasised that our government needs to provide safe passage and allow people to fulfill that basic and fundamental human right to move in safety and dignity. As another winter approaches, the time for action is now.