A personal account from Michael Collins, ons of the Coordinators at Right to Remain.

On Saturday I joined several hundred people at the Shut Down Yarl’s Wood protest against immigration detention. It was a powerful show of solidarity with the people, mostly women, locked up in the notorious detention centre.

It was an emotional day, especially when we were joined by women behind the wire, waving and shouting to us through the tiny gaps their windows will open, and then speaking to us over amplified phone calls, leading us in call and response chants – we want freedom… shut it down… we are not animals… end this racist system…

There was a diverse mix of people at the protest – little kids, elderly people, more women than men, and a good number of people who have been in detention including some who only got out of Yarl’s Wood in the last few days or weeks.

By 10:30, the four London coaches were leaving. A team of volunteers rounded up those without coach tickets, and they headed off for the train to Bedford, taking advantage of discounted group travel tickets. Through twitter we knew that coaches and minibuses had long since set off from more distant parts – Glasgow, Manchester, Leeds, Sheffield, Birmingham… On arrival it was clear that people had travelled from all over the country.

As we travelled through the southern English countryside, my coach captain took to the microphone and told us of her experiences in Yarl’s Wood. She was locked up for 5 months. For the first month and half, she was quiet, polite to the guards, doing as she was told. But in return she got no help, and was on the receiving end of racist abuse. She was called a black bitch, told to shut up, go home. Told by a guard that her imprisonment was costing him tax money to pay for her meals, she was so angered that she stopped eating. She lost 7 kilograms. She decided that she couldn’t be quiet and polite any more, she had to be loud and angry and fight for her rights. She told us that the women in Yarl’s Wood need to know that we are out here supporting them, fighting with them for justice. This set the tone of the day.

We disembarked at Twinwoods Business Park, on the outskirts of Bedford. It’s just like any other banal, out-of-town commercial zone, but this one’s attractions include indoor surfing, indoor skydiving, and an Immigration Removal Centre. (actually, the signs still say “Yarl’s Wood IDC”, from the time when it was more accurately named a detention centre).

After assembling the 20 or so flags I’d brought along (after a long evening at the sewing machine…), I chatted in the sunshine with old friends, sitting in the grass until the Movement For Justice crew strongly encouraged us to get on our feet, get moving and make some noise. And we made a lot of noise.

Once everyone had arrived, we set off around the perimeter fences, along a narrow path beside golden wheat fields (I think it’s wheat, but I’m not sure – I’m from Glasgow). After a while I looked back and couldn’t believe how many were walking behind. There must have been at least 700 people there, maybe more, in a colourful, noisy procession. Singing, chanting – shut it down … no human is illegal … no borders, no nations … brick by brick, wall by wall, detention centres will fall … solidarity forever…

Soon we approached the outer fence of Yarl’s Wood, patched up after being pushed over at last month’s protest. This time we were allowed through, right up to the inner fence, close enough to see and hear the women inside. And we made even more noise. People were banging on the fence, climbing on each other’s shoulders, waving to the women at their windows. Emotions were all over the place. I bumped into someone I know, who spent time in Yarl’s Wood. She was crying, but smiling. We hugged. She kept saying thank you, thank you, it means so much. She wasn’t the only one to shed tears. 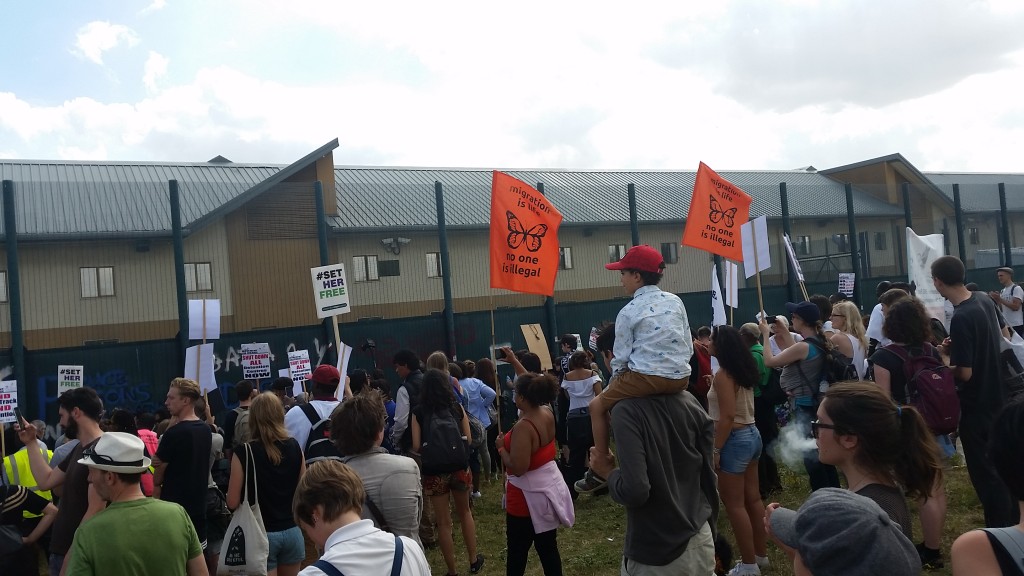 It took a long time for everyone to make their way to the space at the back of Crane wing and Dove wing (such beautiful names they have for such an ugly, brutal place). Just about everyone had a go at banging on the fence – it’s a good way to release some pent-up anger, I highly recommend it. And we all raised our voices together, as if we could chant down the walls, chant down Babylon. Shut it doooooown, shut it down!

Then word went around to quieten down. Some of the women inside were to speak to the crowd over the phone. The phone was connected to the sound system, and we listened. The women told us of their experiences, of being locked up for months on end, not knowing if they would ever get out. Of racist abuse by guards, of rooms being searched for no reason. It was a hot, hot day, there was no air conditioning, and windows can only be opened a few inches. There were elderly, disabled women, pregnant women.

It was frustrating, to be facing this wall, seeing and hearing the women and unable to tear it down. But at the end of the day I left feeling lifted by the show of strength – by the women inside, the recently released, and the solidarity of all those who came.

Immigration detention is a blight on our society. But there is pressure building, and despite the increasingly fascistic anti-immigrant rhetoric of the government and much of the media, there is a feeling that we are making progress. It’s possible that we can win some real, radical changes. It’s certain that we won’t give up until the last of the detention centres are shut down.

Eventually we had to go. It was hard to leave. As the crowd set off to return to the coaches, some women stayed behind and started up a new chant, with the words of Assata Shakur echoing off the walls of Yarl’s Wood: 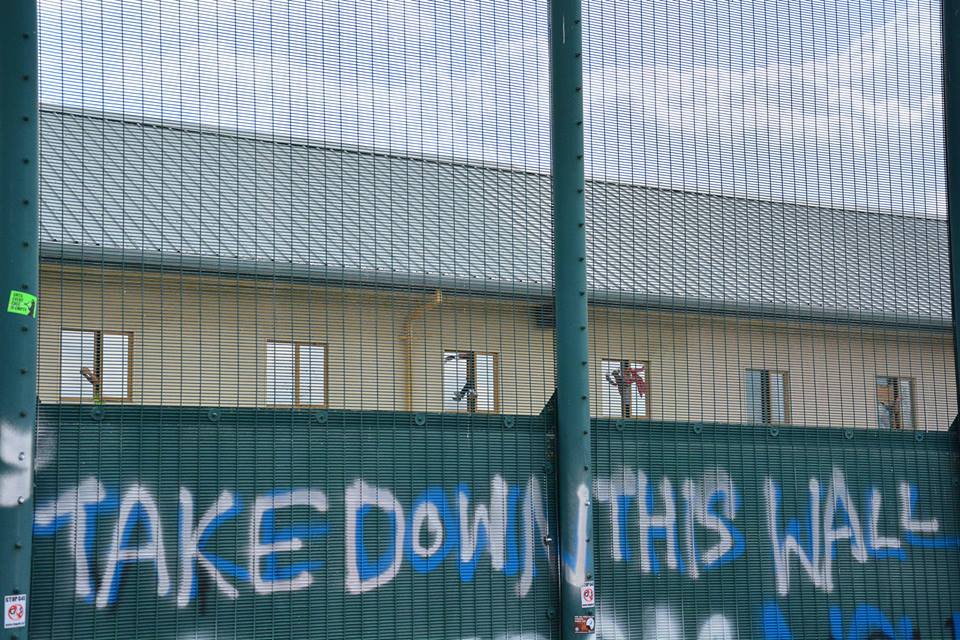