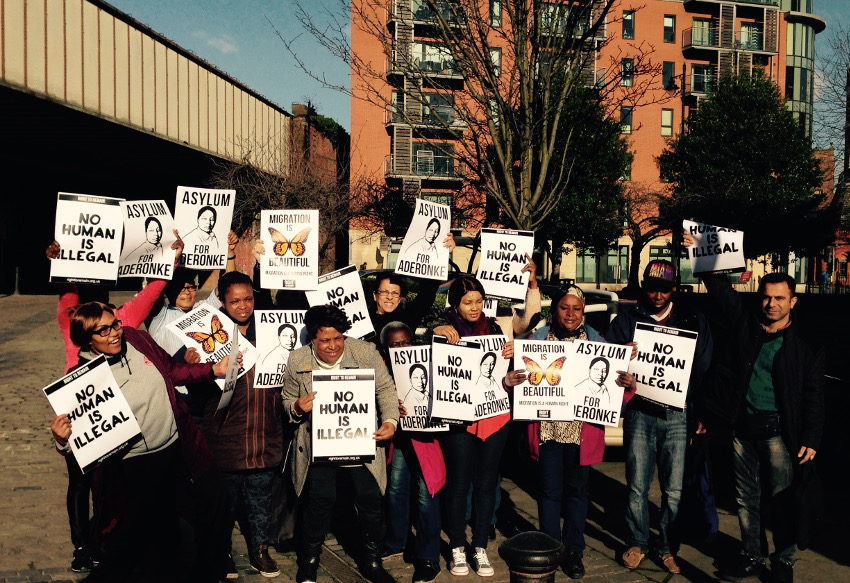 This was the message that closed our meeting with Manchester Migrant Solidarity this week.  It was good to see familiar faces – people who had attended our training on taking action for the right to remain in Leeds about 18 months ago, or in Manchester a year ago, supporters we demonstrated with at Aderonke’s solidarity vigil last week – and to meet new people who come together every fortnight and support each other in their struggles for the right to remain, and in their fight to change the violent and unjust asylum and immigration system.

At the meeting, we talked about signing support for when you have to go and report at the Home Office, and agreeing a detention action plan in case the worst happens; the extraordinary damage that detention does and the group’s campaign to Shut Down Yarl’s Wood; the brilliant work members are doing (with Manchester Migrant Solidarity and the many other groups they are part of, such as Women Asylum Seekers Together (WAST), City of Sanctuary, and the Lesbian Immigration Support Group) to raise awareness of the realities of being an asylum-seeker in the UK; and how the knowledge to support each other comes from the group itself, with their first-hand experience of navigating the legal process.

We’re really pleased that some of Manchester Migrant Solidarity will be joining us on the migrant rights bloc of the Stand Up to Racism demo on 21 March in London (you can see them holding up some of the placards we’ve made for the event above!).

On our way to the meeting with Manchester Migrant Solidarity, we had popped into the exhibition they had contributed to (with WAST and Safety4Sisters) at the People’s History Museum.

The exhibition featured quotes from group members: really important voices speaking out about the damage and fear that hangs over you when you go and report at the Home Office, when you go about your daily life terrified at the prospect of an immigration raid picking you up and taking you away to detention.  There were also some great photos of the demo the group organised in Piccadilly Gardens last year, a vibrant demo of singing and dancing, locating the issue of detention firmly in Manchester.  Just because there isn’t a long-term detention centre nearby, does not mean local communities aren’t affected.  The fear of being detained, the experience in detention, and the long-term social and emotional consequences of detention after release mean that all of our communities need to face up to this outrage, as do MPs whose constituency does not cover a detention centre.

Legal evidence and singing in Liverpool

The following day, we met with the wonderful Migrant Artists Mutual Aid, a women’s self-help group based in Liverpool.  We’ve been working with MAMA for a while now, and they sang brilliantly and movingly at our 2014 annual conference.   This time, we ran a training session on finding evidence online for fresh asylum and human rights claims, with attendees clustered round lap-tops doing activities (often in different languages).  The training session then morphed into a choir practice, which we were privileged to join in with.  I think face massaging, making funny warm-up noises and signing stirring songs should become a standard component of our training!