A commercial airline can refuse to take a passenger if they are being removed/deported against their will: the pilot has the legal power to refuse to carry a passenger if they think it would in any way put the flight at risk. Airline campaigning is a last-minute action that involves contacting the airline and asking them not to take the person against their will, and explaining why.

The Home Office no longer have a legal obligation to provide “removal directions”, the document on which was specified the details of the flight the person is booked on. In some cases, the Home Office may still issue a “courtesy letter” with this information, but there is no legal requirement to do so. If the letter does specify the flight details, you can then search online for the airline and find their UK contact details, and friends/supporters can get in touch with the airline.

Airline campaigning has in some cases led to an airline refusing to carry a person being removed/deported. This has often been in combination with the person facing removal/deportation speaking to staff as well. Raising awareness of the case meant that staff were probably aware the individual may speak to them, and possibly made them more receptive to their explanation.

Contacting the airline only really works if the removal/deportation is booked on a normal, scheduled passenger flight. If a person is due to be removed on a charter flight, the company operating the flight and the departure airport will not be revealed, making any action very difficult.

Even if a courtesy letter with the flight details is not issued, the person being removed will still have the option of communicating with airline staff that they are being taken against their will, and the reasons why the airline should refuse to carry them.

You don’t have to go public when contacting an airline – a small group of people can do it privately. If you are happy to have your name and some of your details made public, and you don’t think this will put you in danger, you could use more public methods of communicating with the airline. Commercial airlines may respond if they think their business reputation is being damaged by being implicated in removals/deportations.

Almost all the big airlines have Facebook pages and Twitter accounts. Friends/supporters can post information about you being removed/deported against your will and why this is wrong, on these sites. With Facebook pages, you generally have to ‘like’ the page before you can post comments, and not all pages allow comments. These actions show all of their customers and potential customers can see the companies are involved in forced removals and complicity in the violation of human rights.

Think very carefully about putting your name and details into the public domain. If you are facing removal/deportation to possible persecution, it could be dangerous to have your information on the internet. It might make things more dangerous is you are removed/deported.

1. Find out which airline is carrying out the removal/deportation. The flight number on the courtesy letter (if issued) will tell you this. For example, flight “KQ101” is a Kenya Airways flight to Nairobi, flights beginning with ET are Ethiopia Airlines. You can put the flight number into an internet search engine to find out the airline. If the flight begins PVT, this is a private charter flight and you will not be able to contact the airline as the Home Office will not reveal who the company is.

3. Encourage friends, family and supporters to contact that airline by fax, email and phone calls or by post if there is time. If you think that emails are being blocked by an airline – perhaps after lots of supporters contact them with the subject header as the name of the person facing removal/deportation – you can try changing the subject header.

4. It is better for lots of different people to contact the airline once or twice to show the widespread support for the person at risk, and so that one person is not accused of harassing the airline.

5.You can begin contacting the airline as soon as the courtesy letter is issued, but you should step up the level of activity in the days and hours leading up to the flight.

8. Ask that your concerns are recorded, and are passed on to the pilot/flight staff, and medical staff if appropriate.

9. Feed back any response you get to the person facing removal/deportation and their support group. It can be useful to set up an email address, particularly if you go public, so supporters can forward email replies or news directly to the support group, and can copy the group into the emails they send so you can get an idea of how many people have taken action.

10. Some supporters hold solidarity demonstrations near the check-in desk around the time other passengers would be checking in. They may wear campaign T-shirts or hand out leaflets, explaining what is happening and why other passengers should express their objections. This isn’t illegal but security in airports is tight and airports are private property, so think carefully about who should take part in these actions (people with insecure status/no British citizenship should be especially careful about getting involved in actions like this).

11. If the person facing removal/deportation is taken to the airport, they can communicate their concerns directly to airline staff, the pilot and other passengers. The pilot can take the view that they will not carry someone who does not want to travel, or that someone being taken against their will could put the flight in danger. Remember that the person facing removal/deportation will probably be surrounded by security/escort staff. 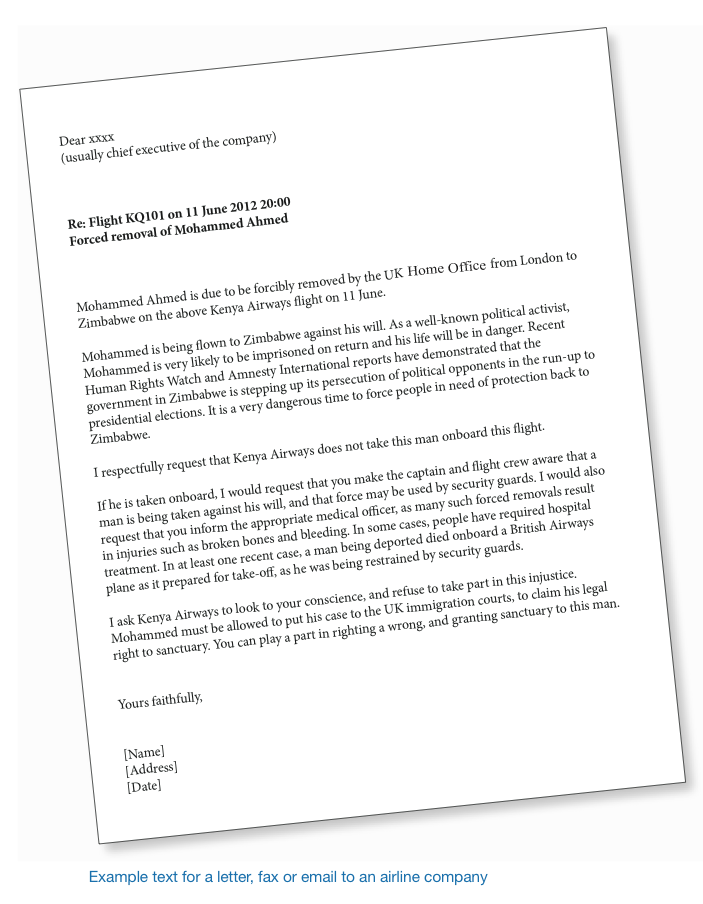