If you have come to the UK and you need to stay because you would be in danger in your country of origin or residence, and you want the UK to grant you international protection, you need to claim asylum.

You claim asylum via the UK Home Office.

This section looks at: how you claim asylum; legal representation; accommodation and financial support; reporting to the Home Office; immigration detention; and actions you should be taking at this stage to be in the best possible position to get the right to stay.

The UK government may refuse to consider asylum claims made after 1 January 2021 if they believe you “could enjoy sufficient protection in a safe third country”. This includes if you travelled through another country on the way to the UK and/or there is a country to which the UK says you have a “connection”. These rules replace the Dublin Regulations, which no longer operate in the UK after Brexit. Under the previous rules, the other country had to accept responsibility for your asylum claim in order for the UK to say that it was “inadmissible”. The new rules do not have this requirement. Read our summary of the new rules here.

Some people claim asylum immediately on entering the UK, at the port at which they arrive. They do this by telling the immigration officials there that they wish to claim asylum. If you do this, you will usually have your first interview to gather basic information about you and your journey – your screening interview – that day or in the next five days.

If you don’t claim asylum immediately on entering the UK, you will generally need to register your asylum claim by telephoning to make an appointment to claim asylum at the Screening Unit in Croydon. This is the same for adults and children – in the case of unaccompanied children, however, they should have their welfare interview locally rather than having to travel to Croydon if that is not the nearest Home Office branch.

If you have nowhere to live, you do not need to telephone first to register your asylum claim – you can just present yourself at the Screening Unit in Croydon.

See the Screening Interview section for information on phoning the Home Office and presenting in person.

The exception to this process for claiming asylum is if you arrive to the UK in Northern Ireland – in this situation you claim asylum at the Bryson Asylum Service in Belfast.

The time period between the screening interview and substantive interview can vary. It can be many months, and at the time of writing, some people are waiting as long as a year.

You may want to submit evidence to the Home Office at (or after) your substantive interview. If you have a lawyer, make sure you discuss this with them first.

The Home Office may take many months to make a decision on your asylum claim.In 2019, most decisions took more than six months.

If your asylum claim is refused, you may have the right to appeal the refusal in the courts. The first place you would appeal is the First-tier Tribunal.

After a Refusal section 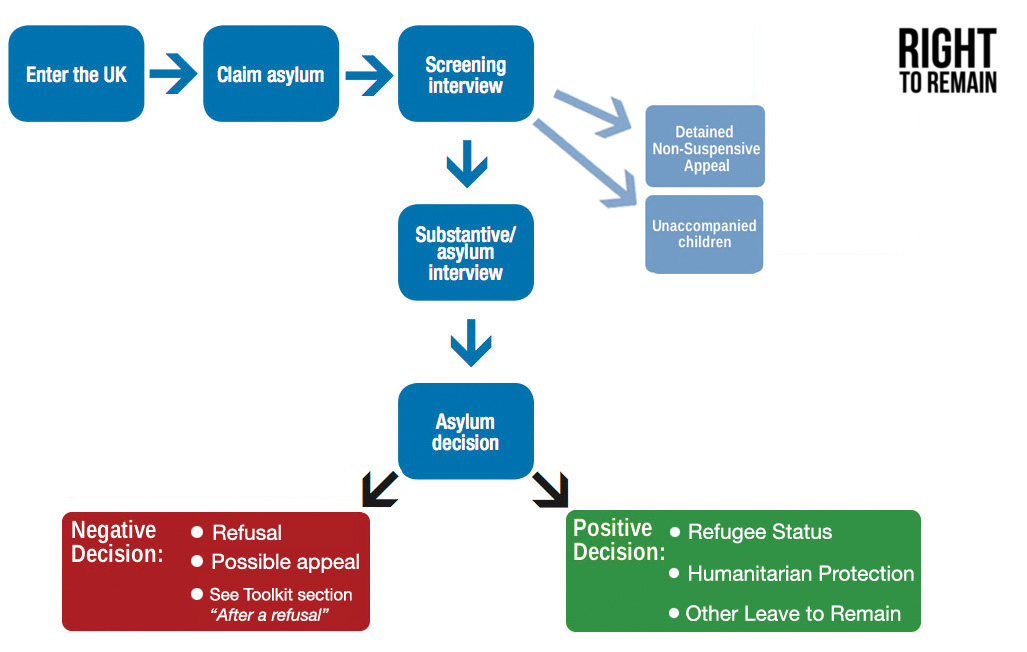 If you have no or little income, you may be able to get legal aid to pay for the cost of getting legal advice. The government allocates funds for this purpose, and the legal aid fees are paid directly to the legal advice provider.

If you claim asylum immediately or soon after arriving in the UK, you will usually be able to meet with a legal aid lawyer after your screening interview and before your substantive interview.

You will not be automatically allocated a lawyer, but you can find out about your nearest legal aid law firm or law centre by asking at your asylum accommodation (see below).

If you have already been in the UK for some time, you should try and see a lawyer before you claim asylum.

Read more about legal aid, and alternatives if you are not eligible for it, in the Your Legal Case section of the Toolkit.

If you do not have anywhere to live and you have no money to support yourself, you need to tell the Home Office this when you claim asylum. At this point of the legal process, you will be entitled to housing and a small amount of money, but you will have no choice where in the country you live, unless you know someone who will let you stay in their house.

In almost all cases, if you are seeking asylum you will not be allowed to work. If you are caught working illegally (without permission), you could be prosecuted and sent to prison.

If you are destitute, you can apply for housing and basic living expenses – “asylum support”, which is administered by the Home Office.

Reporting to the Home Office

If you claimed asylum and have not had a decision yet, or have had your asylum claim refused, you may have to report to the Home Office at a specified time each week, two weeks, or month (or sometimes less regularly than this).

These reporting requirements may not be set up by the Home Office until some time after you claim asylum – some people are never required to report, and the Home Office do not have the resources to ask everybody without immigration status to regularly report.

If you are asked to report, this should be at the nearest immigration office to you – either a branch of the Home Office, or an immigration desk at a nearby police station.

At these appointments, you may just be asked to sign your name. Sometimes, the immigration officer may ask you questions. Although the appointment might only last a matter of minutes, the Home Office takes it seriously and may use it against you if you do not attend. At the later stages of your asylum case, you are also at risk of being detained at one of these appointments. See below.

Read about being prepared in case of detention on the Detention section of the Toolkit.

Preparing in Case of Detention section

If you do not have the right to remain, you are liable to being held in immigration detention. The detention centres, known officially as “Immigration Removal Centres”, are like prisons.

You can be detained at any time during your claim, but there are several points in the asylum process when it can be more likely to happen.

When you claim asylum, if your claim is deemed “clearly unfounded” you may be detained at the screening interview.

If you have been in the UK for a while and do not have valid immigration papers, are picked up by immigration enforcement and claim asylum, you may be detained and your case placed in the “detained asylum casework” category. If your asylum claim is refused, you will have the right of appeal in the UK unless your case has been categorised as “non-suspensive appeal”.

Most people in the “detained asylum casework” category are released from detention before their appeal is heard.

If you are not detained when you claim asylum, you will usually not be detained until after a refusal of your asylum claim and a dismissal of an appeal at the First-tier Tribunal if you had an appeal right. This is when you are what the Home Office calls “appeal rights exhausted”.

After a Refusal section

There is currently no time limit on adult detention in the UK – you can be detained indefinitely (with the exception of pregnant women, who can usually only be detained for up to 72 hours).

It is very difficult to go through the asylum process without support. In the ACTION SECTIONS throughout this Toolkit, there are suggestions of actions that you and the people around you can take, to help you get through the process.

If you have not yet had your asylum substantive interview, start preparing for it now. See Substantive Interview section.

Most people who apply for asylum are refused asylum by the Home Office. Make sure you know what your legal options are if this happens.

Have good people around you who can support you. It is not a nice experience to be told by the Home Office, and maybe by the courts as well, that you are not telling the truth. With people standing by you in solidarity, you are more likely to be able to keep going, and keep fighting for justice in your case.

Your MP will depend on the constituency you live in or have strong connections to. A constituency is an area of the UK where the voters elect one MP.

You can find out who your local MP is, and how to contact them, at TheyWorkForYou.com.

It’s never too early to start thinking about meeting your MP. If they already know you, they will be more likely to want to help if you go to speak to them when something has gone wrong in your case. It’s better to try and meet them in person than to phone or email. You can meet them during their “surgery” where they meet members of their constituency face-to-face to talk about local issues.

If you’re a member of a local group, you might like to invite your local MP to one of the group’s events. If you later approach the MP for help, your connection to that group may be a positive factor and may encourage them to help you.