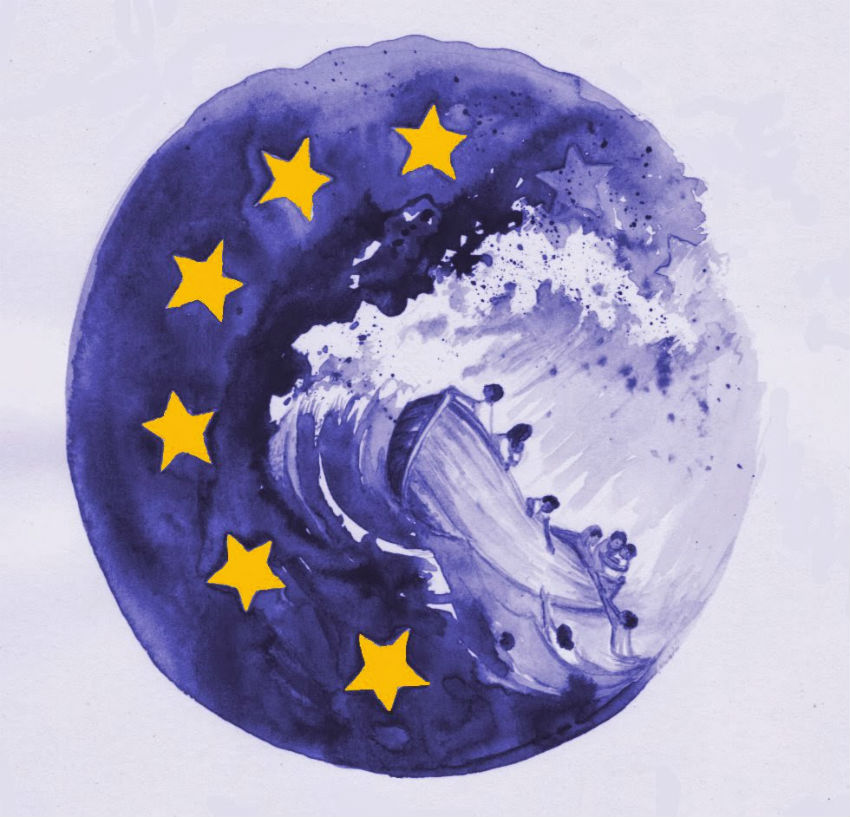 This is a guest blog post by Judith Vonberg. Judith is a PhD student studying the mutual perception of Britons and Germans after the Second World War. As a freelance journalist she writes about migration and nationality and has recently appeared on BBC TV World News and BBC Radio Scotland discussing the current migration crisis. Follow her on twitter @JudithVonberg

Germany’s decision announced this week to suspend the Dublin Protocol in relation to Syrian refugees has been widely reported. The rule, in place since 1990, demands that asylum seekers be returned to the EU country in which they first arrived. Yet this has meant many refugees being removed to Greece, Malta and Italy, countries struggling to cope with the daily arrival of hundreds or thousands of people across the Mediterranean. Shelter and care in these countries is often inadequate for both new and returning refugees, in some cases, it is claimed, even contravening Article 3 of the European Convention on Human Rights, the right to freedom from inhuman and degrading treatment.

The new rule is not a formal directive, rather a guideline for the treatment of Syrian refugees in Germany. Moreover, the decision by the German government does not ‘flout’ the protocol, as some reports suggest. The regulation allows for its temporary suspension with regard to specific groups. In this case, Syrians applying for refugee status in Germany will no longer be required to reveal where they first entered the EU and their claim to asylum will be processed regardless of any previous claims made.

In reality, little will change. Up to the end of July this year, only 131 Syrian asylum seekers had been returned from Germany to another EU country due to the Dublin Protocol. Yet the decision will speed up the processing of applications, often significantly slowed by the paperwork associated with the regulation. More importantly, however, it is a symbolic gesture towards both European and global solidarity, something that has been sorely lacking in the rhetoric emerging from countries including Hungary, Britain and France in the last few weeks.

Speaking to VICE News, Peter Bouckaert, emergencies director for Human Rights Watch, praised the decision as a ‘very positive step’. He went on to say, ‘I think it’s high time for Europe to have a conversation about how Europe as a whole – and the rest of the world – will help share the burden of the large number of people who are fleeing conflict and repression in the Middle East and Africa. It’s clear that simply building walls and trying to shift the burden onto a few countries is not working.’ He added, ‘This is a crisis much more about European countries unwilling to shoulder their share of this burden rather than a crisis about the shared number of refugees.’

Germany seems to have grasped two facts that continue to elude many other national governments across Europe, or are perhaps being wilfully ignored. First, that the European project was founded on – the clue is there in the name – ‘union’. In an interview with German television network ZDF last week, Angela Merkel warned that the issue of asylum ‘could be the next major European project, in which we show whether we are really able to take joint action’.

The inability of European nations to reach an agreement on refugee quotas and the petty backbiting shown by Britain and France over the situation at Calais suggest that the ‘joint action’ Merkel calls for is a distant dream. Instead of this being a ‘European project’, rooted in unity, too many nations have withdrawn into the comparative safety of national introspection and self-interest.

Solidarity between multiple nations and the ability to act collectively and thus powerfully should be two of the EU’s greatest strengths. Yet at a time when such attributes are needed more than ever, Germany’s decision to shoulder some of the burden being borne by the southern European nations is an almost isolated show of European solidarity.

Second, the decision shows a recognition that, along with the rights and privileges we enjoy as EU or European citizens come responsibilities, one of which is to offer safe haven to those who need it. Despite its failings, the EU is repeatedly hailed for its success in creating a union of nations that have lived in peace and relative prosperity for half a century. With this success, the EU has become a highly desirable destination for people fleeing war and persecution around the globe, as well as people who are simply seeking a better life for themselves and their families. This fact should be a cause for pride and celebration among Europeans, not hostility.

Germany’s policy change shows an acceptance of our duty to share this peace and prosperity with others whose nations are gripped by war and poverty. It is a bold decision, taken during a spate of vicious and violent attacks in Germany on buildings that house, or are due to house, asylum seekers. Merkel voiced her outrage over these attacks on Monday, calling them ‘abhorrent’ and ‘shameful’. Defiant rhetoric was matched with action as the decision to suspend the Dublin Protocol was made public on the same day, a decision that both shows a refusal to appease anti-immigrant sentiment and indicates that the country will not be held to ransom by a small number of xenophobic protesters.

Indeed, the majority of Germans are happy for asylum seekers to be given refuge in their country. A recent poll cited by the BBC revealed that 67% of Germans were ‘very worried’ by attacks on refugee homes, while 93% of respondents in another survey said it was right to give asylum to those fleeing conflict. Countless examples from across Germany of ordinary people giving up their time or possessions to help the refugees corroborate these statistics.

German journalist Anna Dushime is just one example. Distributing water, snacks and nappies among the crowds waiting to register as refugees at the Office for Health and Social Affairs in Berlin, she got talking to a Syrian family who she later invited to stay with her until the office opened again the following Monday. An overwhelming response greeted her Facebook appeal for clothes for the family, one woman arriving with a large holdall filled with clothes, shoes, toys and colouring pencils. When Dushime later sent her a photo of the two Syrian girls in their ‘new’ clothes, she replied, ‘I’ve got more if you need it’.

Meanwhile a video filmed from inside a bus full of asylum seekers arriving at their new accommodation in Germany is being shared on Facebook. Lining the pavements are crowds of locals, waving, clapping and holding flowers, banners and homemade signs welcoming the refugees to their town. The people inside the bus are clearly deeply touched, murmuring ‘thank you, thank you’.

Where is Britain’s solidarity?

In contrast, Britain’s contribution to both European and global solidarity during this migration crisis has been limited, if not entirely absent. This is epitomised by the British government’s reaction to the situation in Calais, where national self-interest has dominated and little attempt made to alleviate either the burden on France or the suffering of the refugees in the camps. With the British government (and even much of the political opposition) taking such a hostile stance, it has been left to individual activists, NGOs and faith groups to take action to show this position does not represent all of the British electorate.

The government’s eventual commitment – taking the form of fences and guard dogs – bears more than an echo of Hungary’s narrow-minded response to the prospect of thousands of refugees crossing its borders from Serbia. The fence currently being erected along the 110-mile border is the brainchild of a right-wing prime minister, Viktor Orbán, who berated the EU in July for being unable to protect its borders against unarmed refugees and called for Europe to be only for Europeans. Is this the kind of company we want to be keeping?

Response from the conservative press and politicians to statistics this week showing net migration in the year to March at 330,000, an all-time high, and revealing that over 8 million Britons were born abroad is equally concerning. Immigration Minister James Brokenshire described the net migration statistics as ‘deeply disappointing’, while The Daily Telegraph described the rise in the foreign-born population as ‘bad news’.

This rhetoric and the continued commitment to reducing net migration to the tens of thousands – a policy described as ‘bizarre and unachievable’ by Simon Walter, Director General of the Institute of Directors – indicates a desire for a Britain inhabited almost solely by those who are British-born and raised. This desire and the populist policies that emerge from it reflect a total disregard for EU and global realities.

European unity demands both that people be allowed to move freely and that burdens are shared between nations, each taking on as much as they are able. As one of the world’s largest economies with a long tradition of welcoming refugees – as politicians are so keen to remind us – Britain must, as immigration lawyer Greg Ó Ceallaigh told Handlesblatt, ‘accept responsibility for a chunk of the people who are feeling persecution right on Europe’s doorstep’.

‘There are moments in our European history when we face an exceptional situation’, French President François Hollande said on Monday. ‘Today is an exceptional situation but it is an exceptional situation that will continue’. The European response must be both collective and exceptional in order to meet the challenge. Germany is leading the way, not by building fences but by tearing down the barriers that prevent refugees reaching safety; not by bowing to populist opinion or acting with pure self-interest but by standing up against hatred with strong rhetoric and a pragmatic and humanitarian policy. This is the type of big, brave, far-reaching politics we need in Europe right now. European and global solidarity is the only response and Britain must now take its place at the forefront.

One comment on “Germany’s suspension of the Dublin Protocol: a welcome display of European and global solidarity”