Tienga Ngale is co-chair of the Right to Remain management committee. Here he writes about how the support he has given and received meant that he “spent little time broken by my own predicament.” 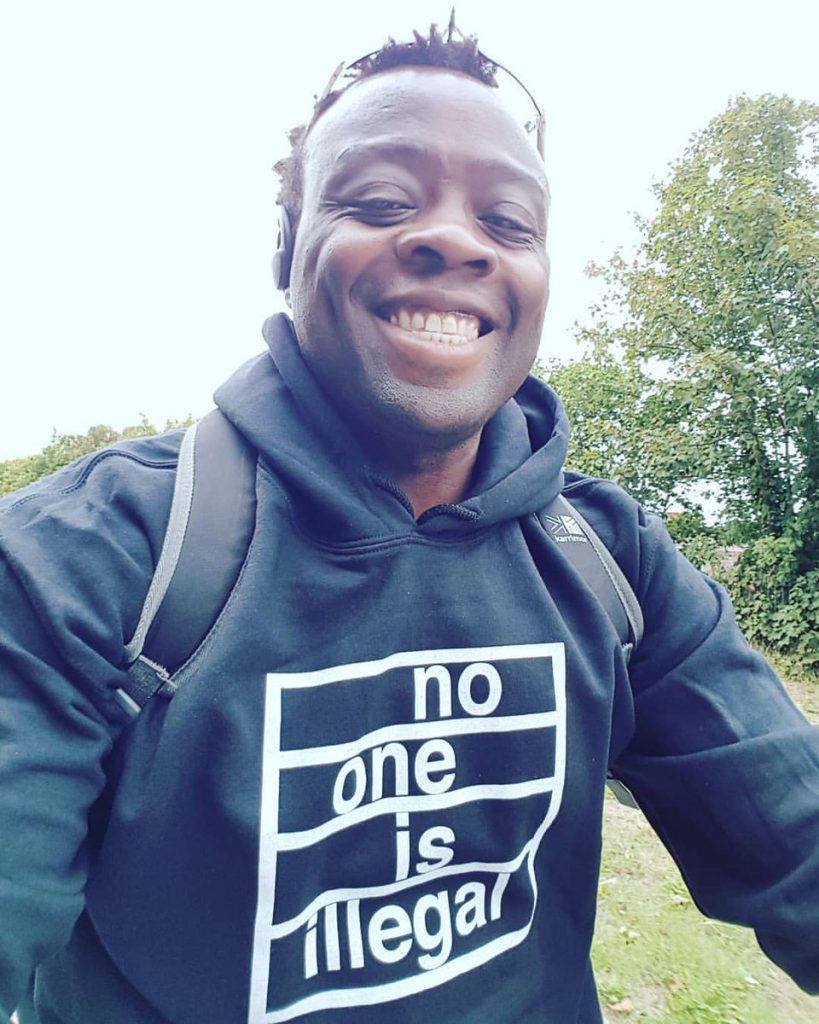 I became a member of the Right to Remain Management Committee about six years ago, when it was still famously known as National Coalition Anti Deportation Campaigns (NCADC). I joined the organisation’s board because I had the years to know its work – the campaigns, the Toolkit.

I have been in the UK for many years and my personal experience of the British asylum and immigration system – along with my community experience of working with vulnerable people such as refugees, homeless, older people, people with disability and substance misuse – had firmed my determination to get involved. Some of the language used by politicians and mainstream media in relation to immigration are often replicated in the way that benefit claimants, or homeless people are blamefully portrayed. Even older people are not spared by public shaming.

I arrived in the UK as an asylum seeker with no English and as I spent my early months trying to make sense of my new surroundings, I quickly found myself helping many newly arrived asylum seekers from Cameroon. I escorted some to Home Office appointments, others to solicitor firms, and regularly went with people to the Refugee Council offices in Brixton. It was during one of my visits to the Refugee Council that I came across a leaflet for an advice and guidance training programme through RETAS London. This was that late 1990s.

Although my own asylum claim had been rejected and I was going through an appeal, I seemed to deal with the stress of my own case by finding comfort in helping others – often successfully – within my own community.

I stayed on as a volunteer bilingual adviser with the advice centre where I completed my training, and this is when I will have my first contact with Right to Remain. I had spoken with them in relation to a migrant who was facing deportation. Soon after, I was fortunate to secure paid employment in the NHS. That was then. Although a refused asylum seeker, I had been granted permission to work.

“Such was my level of activity that I spent little time broken by my own predicament.”

I worked with some amazing colleagues who later proved to be immensely crucial to my immigration struggle, when I found myself in detention for three weeks. My experience of detention started in Campsfield detention centre where I spent five days, and was followed by a transfer to the Gatwick detention centre and then the prison of Haslar in Portsmouth. This is when I woke to the force of solidarity community campaigning.

My arrest had spurred all of my colleagues, many of whom had little to no understanding of the asylum process, into a tremendous campaign for my release. I was busier than I had ever been in my time in the UK. Those days, there was no mobile phones in detention centres, only communal phone boxes. So I spent most of my time running around to either answer calls from strangers who were calling to express their support, or meet my colleagues, friends and family who had come to visit me in detention, or I was listening to the plight of fellow detainees, many of whom had been in detention from the moment they had reached the UK. Such was my level of activity that I spent little time in detention broken by my own predicament.

After this ordeal, it would take me a few years before I started to re-examine my experience. For all its horror, the detention had taught me an invaluable lesson. My then colleagues and all those who stood up for me had shown me that I was part of a community. They showed me that I belonged, even when the Home Office tried to say I didn’t. Over the years, many of those who supported me – whether individually or through a campaign – were strangers, British nationals whose compassion and empathy have comforted me and amazed me in equal measure. In a country where anti-immigrant rhetoric makes for prime news, I was profoundly marked by the act of human selflessness that were abundant in my case.

In 2011, I was attending an asylum and refugee event when I engaged in a very helpful conversation about the work of Right to Remain. So, when the opportunity came to join the board, I felt it was time to give something. To do it again, but better. I say this because I had previously been on the board of a refugee centre and never felt that I contributed as much as I could have. Then, I was a refused asylum seeker, wishing to be involved but struggling to keep focused with a mind that was endlessly submerged by the real and constant fear that I could be detained, and… deported.

So, I have been on the board of Right to Remain now for over six years and stand proudest for the journey that has reshaped Right to Remain’s work for migration justice.

Tienga was involved in setting up the Cameroon Community Welfare and Development Association (CACOWEDA), and was a trustee of the Notre Dame Refugee Centre from 2003 to 2010. He coordinated the activity of the Cameroon Support Network until 2011, and was very involved with the Strangers Into Citizens Campaigns both in 2007 and 2009. He has also been a Trade Union Rep, and worked as an advisor in welfare rights and health and social care.